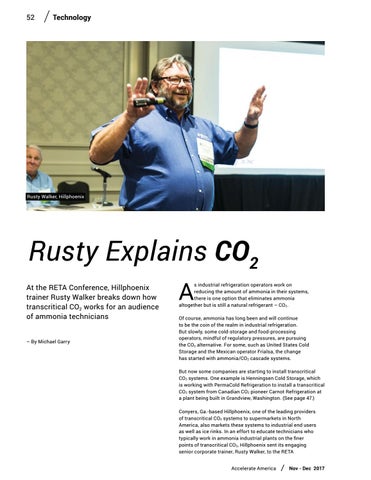 Rusty Explains CO2 At the RETA Conference, Hillphoenix trainer Rusty Walker breaks down how transcritical CO2 works for an audience of ammonia technicians – By Michael Garry

s industrial refrigeration operators work on reducing the amount of ammonia in their systems, there is one option that eliminates ammonia altogether but is still a natural refrigerant – CO 2 . Of course, ammonia has long been and will continue to be the coin of the realm in industrial refrigeration. But slowly, some cold-storage and food-processing operators, mindful of regulatory pressures, are pursuing the CO 2 alternative. For some, such as United States Cold Storage and the Mexican operator Frialsa, the change has started with ammonia/CO 2 cascade systems. But now some companies are starting to install transcritical CO 2 systems. One example is Henningsen Cold Storage, which is working with PermaCold Refrigeration to install a transcritical CO 2 system from Canadian CO 2 pioneer Carnot Refrigeration at a plant being built in Grandview, Washington. (See page 47.) Conyers, Ga.-based Hillphoenix, one of the leading providers of transcritical CO 2 systems to supermarkets in North America, also markets these systems to industrial end users as well as ice rinks. In an effort to educate technicians who typically work in ammonia industrial plants on the finer points of transcritical CO 2 , Hillphoenix sent its engaging senior corporate trainer, Rusty Walker, to the RETA Accelerate America