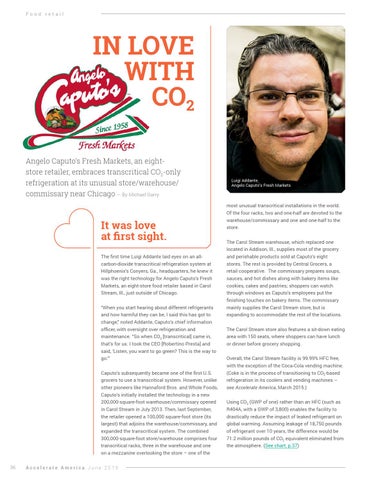 It was love at first sight. The first time Luigi Addante laid eyes on an allcarbon-dioxide transcritical refrigeration system at Hillphoenix’s Conyers, Ga., headquarters, he knew it was the right technology for Angelo Caputo’s Fresh Markets, an eight-store food retailer based in Carol Stream, Ill., just outside of Chicago. “When you start hearing about different refrigerants and how harmful they can be, I said this has got to change,” noted Addante, Caputo’s chief information officer, with oversight over refrigeration and maintenance. “So when CO2 [transcritical] came in, that’s for us. I took the CEO [Robertino Presta] and said, ‘Listen, you want to go green? This is the way to go.’” Caputo’s subsequently became one of the first U.S. grocers to use a transcritical system. However, unlike other pioneers like Hannaford Bros. and Whole Foods, Caputo’s initially installed the technology in a new 200,000-square-foot warehouse/commissary opened in Carol Stream in July 2013. Then, last September, the retailer opened a 100,000 square-foot store (its largest) that adjoins the warehouse/commissary, and expanded the transcritical system. The combined 300,000-square-foot store/warehouse comprises four transcritical racks, three in the warehouse and one on a mezzanine overlooking the store – one of the 36

most unusual transcritical installations in the world. Of the four racks, two and one-half are devoted to the warehouse/commissary and one and one-half to the store. The Carol Stream warehouse, which replaced one located in Addison, Ill., supplies most of the grocery and perishable products sold at Caputo’s eight stores. The rest is provided by Central Grocers, a retail cooperative. The commissary prepares soups, sauces, and hot dishes along with bakery items like cookies, cakes and pastries; shoppers can watch through windows as Caputo’s employees put the finishing touches on bakery items. The commissary mainly supplies the Carol Stream store, but is expanding to accommodate the rest of the locations. The Carol Stream store also features a sit-down eating area with 150 seats, where shoppers can have lunch or dinner before grocery shopping. Overall, the Carol Stream facility is 99.99% HFC free, with the exception of the Coca-Cola vending machine. (Coke is in the process of transitioning to CO2-based refrigeration in its coolers and vending machines – see Accelerate America, March 2015.) Using CO2 (GWP of one) rather than an HFC (such as R404A, with a GWP of 3,800) enables the facility to drastically reduce the impact of leaked refrigerant on global warming. Assuming leakage of 18,750 pounds of refrigerant over 10 years, the difference would be 71.2 million pounds of CO2 equivalent eliminated from the atmosphere. (See chart, p.37)