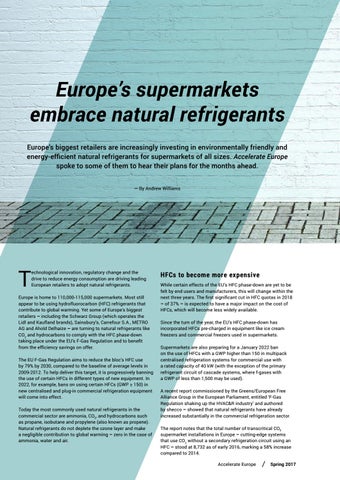 Europe is home to 110,000-115,000 supermarkets. Most still appear to be using hydrofluorocarbon (HFC) refrigerants that contribute to global warming. Yet some of Europe’s biggest retailers – including the Schwarz Group (which operates the Lidl and Kaufland brands), Sainsbury’s, Carrefour S.A., METRO AG and Ahold Delhaize – are turning to natural refrigerants like CO2 and hydrocarbons to comply with the HFC phase-down taking place under the EU’s F-Gas Regulation and to benefit from the efficiency savings on offer. The EU F-Gas Regulation aims to reduce the bloc’s HFC use by 79% by 2030, compared to the baseline of average levels in 2009-2012. To help deliver this target, it is progressively banning the use of certain HFCs in different types of new equipment. In 2022, for example, bans on using certain HFCs (GWP ≥ 150) in new centralised and plug-in commercial refrigeration equipment will come into effect. Today the most commonly used natural refrigerants in the commercial sector are ammonia, CO2, and hydrocarbons such as propane, isobutane and propylene (also known as propene). Natural refrigerants do not deplete the ozone layer and make a negligible contribution to global warming – zero in the case of ammonia, water and air.

HFCs to become more expensive While certain effects of the EU’s HFC phase-down are yet to be felt by end users and manufacturers, this will change within the next three years. The first significant cut in HFC quotas in 2018 – of 37% – is expected to have a major impact on the cost of HFCs, which will become less widely available. Since the turn of the year, the EU’s HFC phase-down has incorporated HFCs pre-charged in equipment like ice cream freezers and commercial freezers used in supermarkets. Supermarkets are also preparing for a January 2022 ban on the use of HFCs with a GWP higher than 150 in multipack centralised refrigeration systems for commercial use with a rated capacity of 40 kW (with the exception of the primary refrigerant circuit of cascade systems, where f-gases with a GWP of less than 1,500 may be used). A recent report commissioned by the Greens/European Free Alliance Group in the European Parliament, entitled ‘F-Gas Regulation shaking up the HVAC&amp;R industry’ and authored by shecco – showed that natural refrigerants have already increased substantially in the commercial refrigeration sector. The report notes that the total number of transcritical CO2 supermarket installations in Europe – cutting-edge systems that use CO2 without a secondary refrigeration circuit using an HFC – stood at 8,732 as of early 2016, marking a 58% increase compared to 2014. Accelerate Europe