GREEN AND GLOBAL: NATURAL REFRIGERANTS AROUND THE WORLD 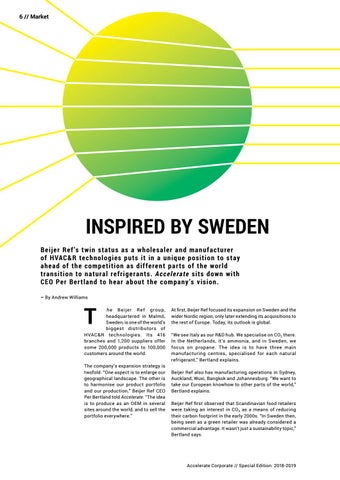 he Beijer Ref group, headquartered in Malmö, Sweden, is one of the world’s biggest distributors of HVAC &amp;R technologies. Its 416 branches and 1,200 suppliers offer some 200,000 products to 100,000 customers around the world. The company’s expansion strategy is twofold. “One aspect is to enlarge our geographical landscape. The other is to harmonise our product portfolio and our production,” Beijer Ref CEO Per Bertland told Accelerate. “The idea is to produce as an OEM in several sites around the world, and to sell the portfolio everywhere.”

At first, Beijer Ref focused its expansion on Sweden and the wider Nordic region, only later extending its acquisitions to the rest of Europe. Today, its outlook is global. “We see Italy as our R&amp;D hub. We specialise on CO 2 there. In the Netherlands, it’s ammonia, and in Sweden, we focus on propane. The idea is to have three main manufacturing centres, specialised for each natural refrigerant,” Bertland explains. Beijer Ref also has manufacturing operations in Sydney, Auckland, Wuxi, Bangkok and Johannesburg. “We want to take our European knowhow to other parts of the world,” Bertland explains. Beijer Ref first observed that Scandinavian food retailers were taking an interest in CO 2 as a means of reducing their carbon footprint in the early 2000s. “In Sweden then, being seen as a green retailer was already considered a commercial advantage. It wasn’t just a sustainability topic,” Bertland says.

GREEN AND GLOBAL: NATURAL REFRIGERANTS AROUND THE WORLD

All over the world, forward-thinking end users of HVAC&R technology are looking for future-proof solutions that will help them to comply with the requirements of the Kigali Amendment to the Montreal Protocol – which compels countries to phase down their use of HFCs according to different national timescales. Natural refrigerants CO2, ammonia and hydrocarbons are proven alternatives that have been used in different HVAC&R applications for many years. Companies that can today provide natural refrigerant-based technology worldwide stand to benefit as the HFC phasedown begins to create new market opportunities for it. As the adoption of HFC-free systems increases worldwide, so is the competition between different natural refrigerant-based options. This edition of Accelerate Corporate looks at these and other trends that show how the global HVAC&R market is evolving. It was made possible by the support of Beijer Ref.