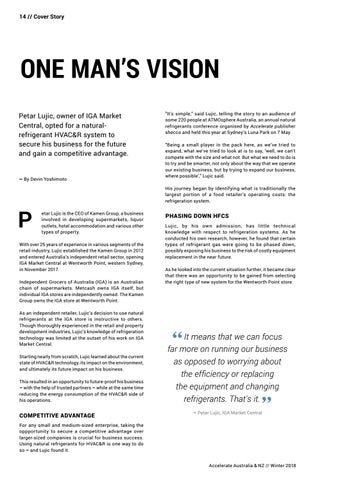 ONE MAN’S VISION Petar Lujic, owner of IGA Market Central, opted for a naturalrefrigerant HVAC&R system to secure his business for the future and gain a competitive advantage.

"It's simple," said Lujic, telling the story to an audience of some 220 people at ATMOsphere Australia, an annual natural refrigerants conference organised by Accelerate publisher shecco and held this year at Sydney’s Luna Park on 7 May. "Being a small player in the pack here, as we've tried to expand, what we've tried to look at is to say, ‘well, we can't compete with the size and what not. But what we need to do is to try and be smarter, not only about the way that we operate our existing business, but by trying to expand our business, where possible’," Lujic said. His journey began by identifying what is traditionally the largest portion of a food retailer's operating costs: the refrigeration system.

etar Lujic is the CEO of Kamen Group, a business involved in developing supermarkets, liquor outlets, hotel accommodation and various other types of property.

With over 25 years of experience in various segments of the retail industry, Lujic established the Kamen Group in 2012 and entered Australia’s independent retail sector, opening IGA Market Central at Wentworth Point, western Sydney, in November 2017. Independent Grocers of Australia (IGA) is an Australian chain of supermarkets. Metcash owns IGA itself, but individual IGA stores are independently owned. The Kamen Group owns the IGA store at Wentworth Point. As an independent retailer, Lujic's decision to use natural refrigerants at the IGA store is instructive to others. Though thoroughly experienced in the retail and property development industries, Lujic's knowledge of refrigeration technology was limited at the outset of his work on IGA Market Central. Starting nearly from scratch, Lujic learned about the current state of HVAC&R technology, its impact on the environment, and ultimately its future impact on his business. This resulted in an opportunity to future-proof his business – with the help of trusted partners – while at the same time reducing the energy consumption of the HVAC&R side of his operations.

PHASING DOWN HFCS Lujic, by his own admission, has little technical knowledge with respect to refrigeration systems. As he conducted his own research, however, he found that certain types of refrigerant gas were going to be phased down, possibly exposing his business to the risk of costly equipment replacement in the near future. As he looked into the current situation further, it became clear that there was an opportunity to be gained from selecting the right type of new system for the Wentworth Point store.

It means that we can focus far more on running our business as opposed to worrying about the efficiency or replacing the equipment and changing refrigerants. That's it. ― Petar Lujic, IGA Market Central

For any small and medium-sized enterprise, taking the oppportunity to secure a competitive advantage over larger-sized companies is crucial for business success. Using natural refrigerants for HVAC&R is one way to do so – and Lujic found it. Accelerate Australia & NZ // Winter 2018

A PIONEERING SPIRIT The history of natural refrigerants is often a story of individuals. Of scientists and engineers pushing the boundaries...

A PIONEERING SPIRIT The history of natural refrigerants is often a story of individuals. Of scientists and engineers pushing the boundaries...