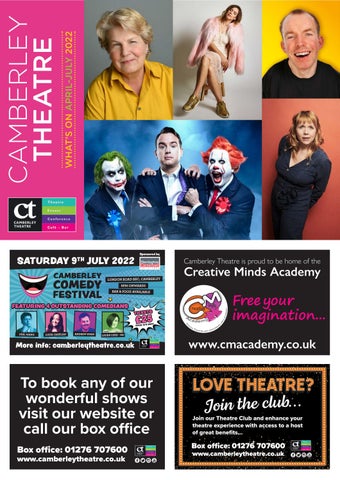 Camberley Theatre is proud to be home of the

o book any of our To wonderful shows visit our website or call our box office Box office: 01276 707600 www.camberleytheatre.co.uk

Join our Theatre Club and enhance your theatre experience with access to a host of great benefits...

20 April Matt Forde: Clowns To The Left of Me, Jokers To The Right “Our foremost satirical stand-up... Whatever your politics, you’ll find excellence here” ★★★★ Stephen Armstrong The Sunday Times

5 April Sandi Toksvig: Next Slide Please (Preview performance) In an evening of warmth, love and laughter, Sandi will explore reasons to be cheerful after many long months of coronacoaster gloom.

15 April The Wizard of Oz Hilarious jokes, dazzling dance routines, glittering scenery plus at the end of the show you will have a chance to meet the larger than life characters! 2pm Under 16s £15, Full £17, Theatre Club £15, Family of 4 £58

6 April Dinosaur Adventure Live! ‘The Greatest Prehistoric Show on Earth’ 65 million years in the making...are you ready for the adventure? Join our intrepid Dinosaur Adventurers as we journey to a world of living, breathing, life-like Dinosaurs. 2pm and 4:30pm Full £14, Theatre Club £13

16 April The Doris Day Story A compelling musical journey through her life incorporating some of her greatest songs, ‘Love Me or Leave Me’, ‘Perhaps, Perhaps, Perhaps’, ‘Pillow Talk’, ‘Black Hills Of Dakota’, and ‘Move Over Darling’. 7:30pm Full £22, Theatre Club £21

21 April An Evening With Mark Billy Billingham TV’s most experienced, highest ranking and most decorated SAS leader and sniper. There will also be a Q &amp; A and a chance to meet Billy.

10 April The Wind In The Willows Join Ratty, Mole, Badger, and the fantastically irrepressible Toad as they embark on the adventure of a lifetime to save Toad Hall from the mischievous weasels! 1pm Full £17, Theatre Club £16, Child £15

17 April Lost Voice Guy: Cerebral Lolsy As featured on America’s Got Talent: The Champions, The Royal Variety Performance, Live At The Apollo, The Last Leg, The One Show, and star of Ability on Radio 4. 7:30pm Full £17, Theatre Club £16

29 April Lost In Music: One Night At The Disco This show boasts a sensational live band, incredibly talented cast and stunning vocals. So, come dressed to impress as we celebrate the golden age of Disco! 7:30pm Full £27.50, Theatre Club £26.50

8 May Kerry Godliman As seen on Mock The Week, Live At The Apollo, Taskmaster, Michael McIntyre’s Big Show, Cats Does Countdown, After Life, Save Me and Call The Midwife and heard on The News Quiz, The Now Show and I’m Sorry I Haven’t A Clue.

20 May Mark Thomas: Hit Refresh: 50 Things About Us Mark picks through the myths, facts and figures of our national identities to ask who do we think we are?

30 April The Hollies Story Discover how two boys from the backstreets of Salford created a band to rival the Beatles, enjoyed dozens of chart hits and were finally inaugurated into the Rock ‘n’ Roll Hall of Fame in 2010. 7:30pm Full £24.50, Theatre Club £23.50

27 May Bumper Blyton Bumper Blyton is a riotous Enid Blyton parody show for grown-ups performed by a cast of some of the UK’s most experienced and bestknown improvisers. ‘They’re phenomenal’ Remote Goat

3 June Bring The Laughter Comedians who appeal to comedy lovers of all ages and backgrounds. 7pm Full £19, Theatre Club £18

13 &amp; 14 May Camberley Youth Wind Orchestra This locally based Youth Orchestra is delighted to be returning to performing at Camberley Theatre after a break of 2 years.

29 May Rapunzel With an exciting opportunity to meet the characters after the show, this is sure to be a “hair-raising” production that you won’t want to miss!

4 June Marty Wilde &amp; The Wild Cats Running Together Tour Marty began his career in 1957- and was one of the first British singers to play a leading part in those early formative and ground-breaking ‘Rock’n’Roll’ years.

9 June Housewives On Holiday From the writers &amp; producers of Hormonal Housewives &amp; Girls Just Wanna Have Fun, it’s time to get away from it all and join the Housewives on Holiday! 7:30pm Full £28, Theatre Club £27

16 June Down For The Count Swing Orchestra: The Legends of Swing Enjoy the vintage sounds of the legendary Duke Ellington, Count Basie, Ella Fitzgerald and Louis Armstrong from the band’s stunning instrumentalists and vocalists. “Awesome!!!” (Michael Bublé)

24 June The Bob Dylan Story The 1960s where Bob and The Band perform thrillingly authentic versions of hits from ‘Blowin’ In The Wind’ to ‘Like A Rolling Stone’ and beyond, complete with evocative visuals and fascinating anecdotes. 7:30pm Full £22, Theatre Club £21

14 July Be Bop A Lula The West End hit revives the artists who introduced rock’n’roll to the UK: Eddie Cochran, Gene Vincent, Billy Fury and Buddy Holly. Featuring a band tighter than a pair of your tightest drainpipe trousers! 7:30pm Full £24, Theatre Club £23

15 July Richard Jones Known as ‘The Military Illusionist’ Richard combines his training from his 10 years serving in the British Army with his expert knowledge of deception to create a unique experience you will not forget! 7:30pm Full £23, Theatre Club £22, Under 16s £21, Family of 4 £74, VIP £51, VIP Theatre Club £50 (includes meet and greet)

11 June The Roy Orbison Story With Barry Steele From The Black and White Night right through to The Traveling Wilburys and beyond. 7:30pm Full £25, Theatre Club £24

1 July Shape of You – The Music of Ed Sheran Prepare to fall in love again to the sounds that touched us all, with a vast catalogue of hits including ‘Thinking Out Loud’, ‘The A-Team’, ‘Castle on the Hill’, ‘Sing’,’ Lego House’, ‘Bad Habits’ and many more.

16 July Typically Tina Performing hits ‘What’s Love Got To Do With It’, ‘Simply The Best’, ‘Addicted To Love’ and ‘Private Dancer’ with style before luring in the crowd to join her in the iconic anthem, ‘Let’s Stay Together’. 7:30pm Full £23.50, Theatre Club £22.50 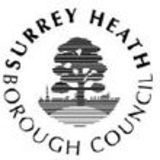