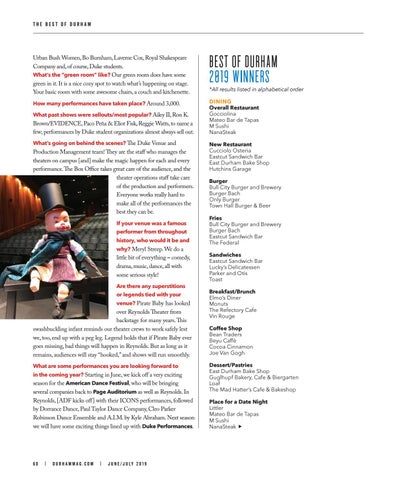 THE BEST OF DURHAM

Urban Bush Women, Bo Burnham, Laverne Cox, Royal Shakespeare Company and, of course, Duke students. What’s the “green room” like? Our green room does have some green in it. It is a nice cozy spot to watch what’s happening on stage. Your basic room with some awesome chairs, a couch and kitchenette. How many performances have taken place? Around 3,000. What past shows were sellouts/most popular? Ailey II, Ron K.

Brown/EVIDENCE, Paco Peña & Eliot Fisk, Reggie Watts, to name a few; performances by Duke student organizations almost always sell out. What’s going on behind the scenes? The Duke Venue and

Production Management team! They are the staff who manages the theaters on campus [and] make the magic happen for each and every performance. The Box Office takes great care of the audience, and the theater operations staff take care of the production and performers. Everyone works really hard to make all of the performances the best they can be.

Are there any superstitions or legends tied with your

over Reynolds Theater from backstage for many years. This swashbuckling infant reminds our theater crews to work safely lest we, too, end up with a peg leg. Legend holds that if Pirate Baby ever goes missing, bad things will happen in Reynolds. But as long as it remains, audiences will stay “hooked,” and shows will run smoothly. What are some performances you are looking forward to

in the coming year? Starting in June, we kick off a very exciting

season for the American Dance Festival, who will be bringing several companies back to Page Auditorium as well as Reynolds. In Reynolds, [ADF kicks off ] with their ICONS performances, followed by Dorrance Dance, Paul Taylor Dance Company, Cleo Parker Robinson Dance Ensemble and A.I.M. by Kyle Abraham. Next season we will have some exciting things lined up with Duke Performances.

little bit of everything – comedy, drama, music, dance, all with some serious style!

why? Meryl Streep. We do a

history, who would it be and

*All results listed in alphabetical order

If your venue was a famous