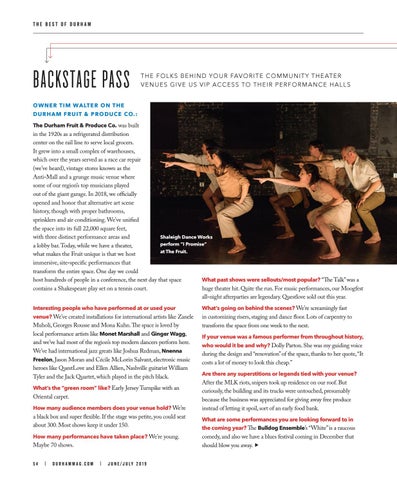 THE BEST OF DURHAM

in the 1920s as a refrigerated distribution center on the rail line to serve local grocers. It grew into a small complex of warehouses, which over the years served as a race car repair (we’ve heard), vintage stores known as the Anti-Mall and a grunge music venue where some of our region’s top musicians played out of the giant garage. In 2018, we officially opened and honor that alternative art scene history, though with proper bathrooms, sprinklers and air conditioning. We’ve unified the space into its full 22,000 square feet, Shaleigh Dance Works with three distinct performance areas and perform “I Promise” a lobby bar. Today, while we have a theater, at The Fruit. what makes the Fruit unique is that we host immersive, site-specific performances that transform the entire space. One day we could What past shows were sellouts/most popular? “The Talk” was a host hundreds of people in a conference, the next day that space huge theater hit. Quite the run. For music performances, our Moogfest contains a Shakespeare play set on a tennis court. all-night afterparties are legendary. Questlove sold out this year. Interesting people who have performed at or used your

Muholi, Georges Rousse and Mona Kuhn. The space is loved by local performance artists like Monet Marshall and Ginger Wagg, and we’ve had most of the region’s top modern dancers perform here. We’ve had international jazz greats like Joshua Redman, Nnenna Freelon, Jason Moran and Cécile McLorin Salvant, electronic music heroes like QuestLove and Ellen Allien, Nashville guitarist William Tyler and the Jack Quartet, which played in the pitch black. What’s the “green room” like? Early Jersey Turnpike with an

How many audience members does your venue hold? We’re

a black box and super flexible. If the stage was petite, you could seat about 300. Most shows keep it under 150. How many performances have taken place? We’re young.

What’s going on behind the scenes? We’re screamingly fast

in customizing risers, staging and dance floor. Lots of carpentry to transform the space from one week to the next. If your venue was a famous performer from throughout history, who would it be and why? Dolly Parton. She was my guiding voice

during the design and “renovation” of the space, thanks to her quote, “It costs a lot of money to look this cheap.” Are there any superstitions or legends tied with your venue?

After the MLK riots, snipers took up residence on our roof. But curiously, the building and its trucks were untouched, presumably because the business was appreciated for giving away free produce instead of letting it spoil, sort of an early food bank.

What are some performances you are looking forward to in

the coming year? The Bulldog Ensemble’s “White” is a raucous

comedy, and also we have a blues festival coming in December that should blow you away. 