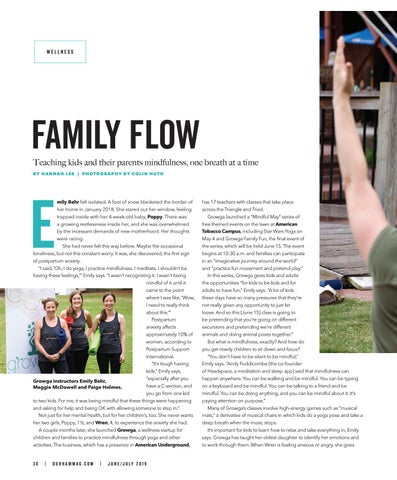 Teaching kids and their parents mindfulness, one breath at a time B Y H A NNA H L E E | PHOTO GR A PHY BY COL IN HUTH

mily Behr felt isolated. A foot of snow blanketed the border of her home in January 2018. She stared out her window, feeling trapped inside with her 4-week-old baby, Poppy. There was a growing restlessness inside her, and she was overwhelmed by the incessant demands of new motherhood. Her thoughts were racing. She had never felt this way before. Maybe the occasional loneliness, but not this constant worry. It was, she discovered, the first sign of postpartum anxiety. “I said, ‘Oh, I do yoga, I practice mindfulness. I meditate. I shouldn’t be having these feelings,’” Emily says. “I wasn’t recognizing it. I wasn’t being mindful of it until it came to the point where I was like, ‘Wow, I need to really think about this.’” Postpartum anxiety affects approximately 10% of women, according to Postpartum Support International. “It’s tough having kids,” Emily says, “especially after you Growga instructors Emily Behr, have a C-section, and Maggie McDowell and Paige Holmes. you go from one kid to two kids. For me, it was being mindful that these things were happening and asking for help and being OK with allowing someone to step in.” Not just for her mental health, but for her children’s, too. She never wants her two girls, Poppy, 1½, and Wren, 4, to experience the anxiety she had. A couple months later, she launched Growga, a wellness startup for children and families to practice mindfulness through yoga and other activities. The business, which has a presence in American Underground, 30

has 17 teachers with classes that take place across the Triangle and Triad. Growga launched a “Mindful May” series of free themed events on the lawn at American Tobacco Campus, including Star Wars Yoga on May 4 and Growga Family Fun, the final event of the series, which will be held June 15. The event begins at 10:30 a.m. and families can participate in an “imaginative journey around the world” and “practice fun movement and pretend play.” In this series, Growga gives kids and adults the opportunities “for kids to be kids and for adults to have fun,” Emily says. “A lot of kids these days have so many pressures that they’re not really given any opportunity to just let loose. And so this [June 15] class is going to be pretending that you’re going on different excursions and pretending we’re different animals and doing animal poses together.” But what is mindfulness, exactly? And how do you get rowdy children to sit down and focus? “You don’t have to be silent to be mindful,” Emily says. “Andy Puddicombe [the co-founder of Headspace, a meditation and sleep app] said that mindfulness can happen anywhere. You can be walking and be mindful. You can be typing on a keyboard and be mindful. You can be talking to a friend and be mindful. You can be doing anything, and you can be mindful about it. It’s

paying attention on purpose.” Many of Growga’s classes involve high-energy games such as “musical mats,” a derivative of musical chairs in which kids do a yoga pose and take a deep breath when the music stops. It’s important for kids to learn how to relax and take everything in, Emily says. Growga has taught her oldest daughter to identify her emotions and to work through them. When Wren is feeling anxious or angry, she goes