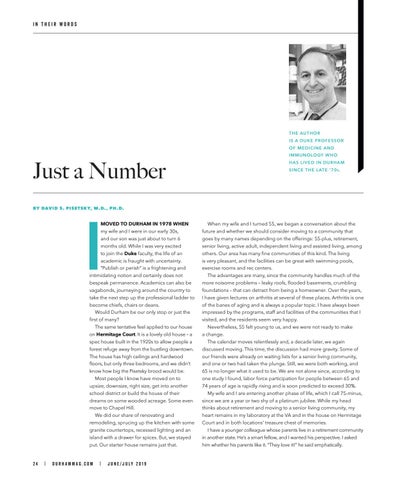 MOVED TO DURHAM IN 1978 WHEN my wife and I were in our early 30s, and our son was just about to turn 6 months old. While I was very excited to join the Duke faculty, the life of an academic is fraught with uncertainty. “Publish or perish” is a frightening and intimidating notion and certainly does not bespeak permanence. Academics can also be vagabonds, journeying around the country to take the next step up the professional ladder to become chiefs, chairs or deans. Would Durham be our only stop or just the first of many? The same tentative feel applied to our house on Hermitage Court. It is a lovely old house – a spec house built in the 1920s to allow people a forest refuge away from the bustling downtown. The house has high ceilings and hardwood floors, but only three bedrooms, and we didn’t know how big the Pisetsky brood would be. Most people I know have moved on to upsize, downsize, right size, get into another school district or build the house of their dreams on some wooded acreage. Some even move to Chapel Hill. We did our share of renovating and remodeling, sprucing up the kitchen with some granite countertops, recessed lighting and an island with a drawer for spices. But, we stayed put. Our starter house remains just that.

When my wife and I turned 55, we began a conversation about the future and whether we should consider moving to a community that goes by many names depending on the offerings: 55-plus, retirement, senior living, active adult, independent living and assisted living, among others. Our area has many fine communities of this kind. The living is very pleasant, and the facilities can be great with swimming pools, exercise rooms and rec centers. The advantages are many, since the community handles much of the more noisome problems – leaky roofs, flooded basements, crumbling foundations – that can detract from being a homeowner. Over the years, I have given lectures on arthritis at several of these places. Arthritis is one of the banes of aging and is always a popular topic. I have always been impressed by the programs, staff and facilities of the communities that I visited, and the residents seem very happy. Nevertheless, 55 felt young to us, and we were not ready to make a change. The calendar moves relentlessly and, a decade later, we again discussed moving. This time, the discussion had more gravity. Some of our friends were already on waiting lists for a senior living community, and one or two had taken the plunge. Still, we were both working, and 65 is no longer what it used to be. We are not alone since, according to one study I found, labor force participation for people between 65 and 74 years of age is rapidly rising and is soon predicted to exceed 30%. My wife and I are entering another phase of life, which I call 75-minus, since we are a year or two shy of a platinum jubilee. While my head thinks about retirement and moving to a senior living community, my heart remains in my laboratory at the VA and in the house on Hermitage Court and in both locations’ treasure chest of memories. I have a younger colleague whose parents live in a retirement community in another state. He’s a smart fellow, and I wanted his perspective. I asked him whether his parents like it. “They love it!” he said emphatically.