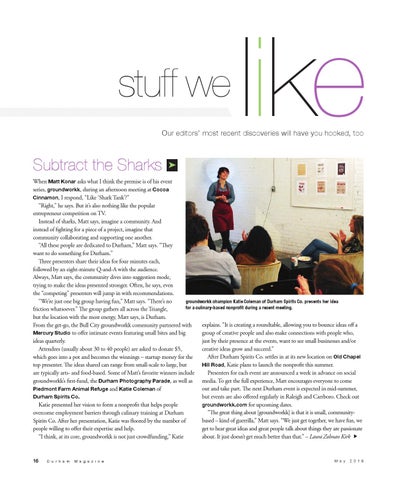 Our editors’ most recent discoveries will have you hooked, too

When Matt Konar asks what I think the premise is of his event series, groundworkk, during an afternoon meeting at Cocoa Cinnamon, I respond, “Like ‘Shark Tank’?” “Right,” he says. But it’s also nothing like the popular entrepreneur competition on TV. Instead of sharks, Matt says, imagine a community. And instead of fighting for a piece of a project, imagine that community collaborating and supporting one another. “All these people are dedicated to Durham,” Matt says. “They want to do something for Durham.” Three presenters share their ideas for four minutes each, followed by an eight-minute Q-and-A with the audience. Always, Matt says, the community dives into suggestion mode, trying to make the ideas presented stronger. Often, he says, even the “competing” presenters will jump in with recommendations. “We’re just one big group having fun,” Matt says. “There’s no groundworkk champion Katie Coleman of Durham Spirits Co. presents her idea for a culinary-based nonprofit during a recent meeting. friction whatsoever.” The group gathers all across the Triangle, but the location with the most energy, Matt says, is Durham. explains. “It is creating a roundtable, allowing you to bounce ideas off a From the get-go, the Bull City groundworkk community partnered with group of creative people and also make connections with people who, Mercury Studio to offer intimate events featuring small bites and big just by their presence at the events, want to see small businesses and/or ideas quarterly. creative ideas grow and succeed.” Attendees (usually about 30 to 40 people) are asked to donate $5, After Durham Spirits Co. settles in at its new location on Old Chapel which goes into a pot and becomes the winnings – startup money for the Hill Road, Katie plans to launch the nonprofit this summer. top presenter. The ideas shared can range from small-scale to large, but Presenters for each event are announced a week in advance on social are typically arts- and food-based. Some of Matt’s favorite winners include media. To get the full experience, Matt encourages everyone to come groundworkk’s first-fund, the Durham Photography Parade, as well as out and take part. The next Durham event is expected in mid-summer, Piedmont Farm Animal Refuge and Katie Coleman of but events are also offered regularly in Raleigh and Carrboro. Check out Durham Spirits Co. groundworkk.com for upcoming dates. Katie presented her vision to form a nonprofit that helps people “The great thing about [groundworkk] is that it is small, communityovercome employment barriers through culinary training at Durham based – kind of guerrilla,” Matt says. “We just get together, we have fun, we Spirits Co. After her presentation, Katie was floored by the number of get to hear great ideas and great people talk about things they are passionate people willing to offer their expertise and help. about. It just doesn’t get much better than that.” – Laura Zolman Kirk “I think, at its core, groundworkk is not just crowdfunding,” Katie