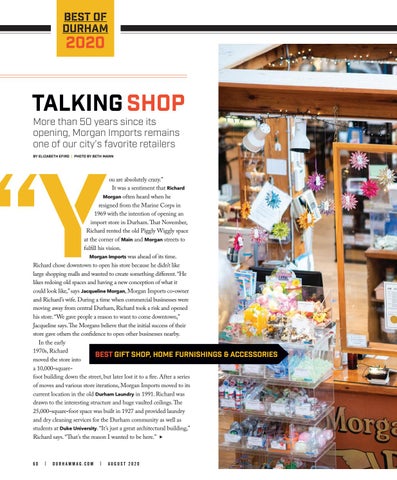 Talking Shop More than 50 years since its opening, Morgan Imports remains one of our city’s favorite retailers BY ELIZABETH EFIRD | PHOTO BY BETH MANN

ou are absolutely crazy.” It was a sentiment that Richard Morgan often heard when he resigned from the Marine Corps in 1969 with the intention of opening an import store in Durham. That November, Richard rented the old Piggly Wiggly space at the corner of Main and Morgan streets to fulfill his vision. Morgan Imports was ahead of its time. Richard chose downtown to open his store because he didn’t like large shopping malls and wanted to create something different. “He likes redoing old spaces and having a new conception of what it could look like,” says Jacqueline Morgan, Morgan Imports co-owner and Richard’s wife. During a time when commercial businesses were moving away from central Durham, Richard took a risk and opened his store. “We gave people a reason to want to come downtown,” Jacqueline says. The Morgans believe that the initial success of their store gave others the confidence to open other businesses nearby. In the early 1970s, Richard best gift shop, Home Furnishings moved the store into a 10,000-squarefoot building down the street, but later lost it to a fire. After a series of moves and various store iterations, Morgan Imports moved to its current location in the old Durham Laundry in 1991. Richard was drawn to the interesting structure and huge vaulted ceilings. The 25,000-square-foot space was built in 1927 and provided laundry and dry cleaning services for the Durham community as well as students at Duke University. “It’s just a great architectural building,” Richard says. “That’s the reason I wanted to be here.” 