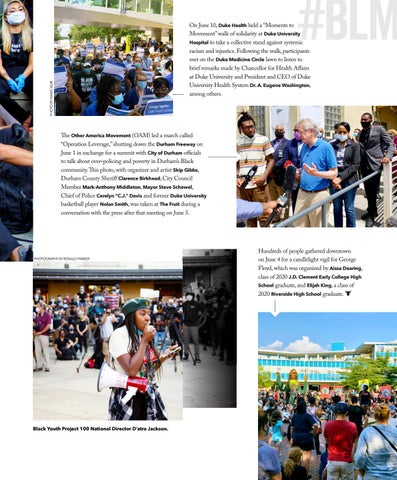 On June 10, Duke Health held a “Moments to Movement” walk of solidarity at Duke University Hospital to take a collective stand against systemic racism and injustice. Following the walk, participants met on the Duke Medicine Circle lawn to listen to brief remarks made by Chancellor for Health Affairs at Duke University and President and CEO of Duke University Health System Dr. A. Eugene Washington, among others.

The Other America Movement (OAM) led a march called “Operation Leverage,” shutting down the Durham Freeway on June 1 in exchange for a summit with City of Durham officials to talk about over-policing and poverty in Durham’s Black community. This photo, with organizer and artist Skip Gibbs, Durham County Sheriff Clarence Birkhead, City Council Member Mark-Anthony Middleton, Mayor Steve Schewel, Chief of Police Cerelyn “C.J.” Davis and former Duke University basketball player Nolan Smith, was taken at The Fruit during a conversation with the press after that meeting on June 5.