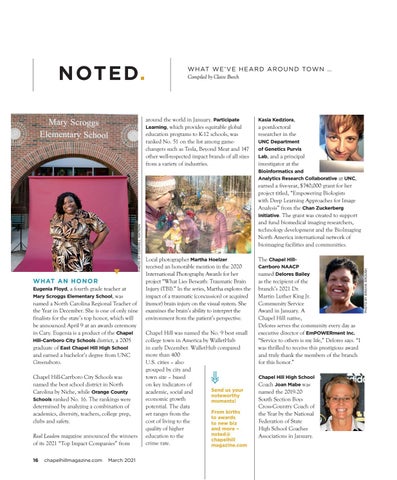 WHAT WE’VE HEARD AROUND TOWN … Compiled by Claire Burch

around the world in January. Participate Learning, which provides equitable global education programs to K-12 schools, was ranked No. 51 on the list among gamechangers such as Tesla, Beyond Meat and 147 other well-respected impact brands of all sizes from a variety of industries.

a postdoctoral researcher in the UNC Department of Genetics Purvis Lab, and a principal

WHAT AN HONOR Eugenia Floyd, a fourth grade teacher at Mary Scroggs Elementary School, was

named a North Carolina Regional Teacher of the Year in December. She is one of only nine finalists for the state’s top honor, which will be announced April 9 at an awards ceremony in Cary. Eugenia is a product of the Chapel Hill-Carrboro City Schools district, a 2005 graduate of East Chapel Hill High School and earned a bachelor’s degree from UNC Greensboro.

Local photographer Martha Hoelzer received an honorable mention in the 2020 International Photography Awards for her project “What Lies Beneath: Traumatic Brain Injury (TBI).” In the series, Martha explores the impact of a traumatic (concussion) or acquired (tumor) brain injury on the visual system. She examines the brain’s ability to interpret the environment from the patient’s perspective. Chapel Hill was named the No. 9 best small college town in America by WalletHub in early December. WalletHub compared more than 400 U.S. cities – also grouped by city and town size – based on key indicators of Send us your academic, social and noteworthy economic growth moments! potential. The data From births set ranges from the to awards cost of living to the to new biz and more – quality of higher noted@ education to the chapelhill crime rate. magazine.com

Chapel Hill-Carrboro City Schools was named the best school district in North Carolina by Niche, while Orange County Schools ranked No. 16. The rankings were determined by analyzing a combination of academics, diversity, teachers, college prep, clubs and safety.

earned a five-year, $740,000 grant for her project titled, “Empowering Biologists with Deep Learning Approaches for Image Analysis” from the Chan Zuckerberg Initiative. The grant was created to support and fund biomedical imaging researchers, technology development and the BioImaging North America international network of bioimaging facilities and communities. The Chapel HillCarrboro NAACP

named Delores Bailey as the recipient of the branch’s 2021 Dr. Martin Luther King Jr. Community Service Award in January. A Chapel Hill native, Delores serves the community every day as executive director of EmPOWERment Inc. “Service to others is my life,” Delores says. “I was thrilled to receive this prestigious award and truly thank the members of the branch for this honor.” Chapel Hill High School

Coach Joan Mabe was named the 2019-20 South Section Boys Cross-Country Coach of the Year by the National Federation of State High School Coaches Associations in January.