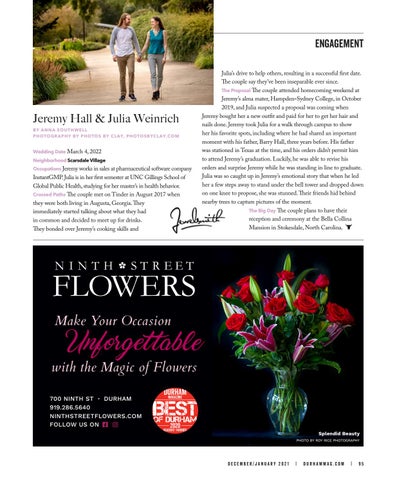 InstantGMP. Julia is in her first semester at UNC Gillings School of Global Public Health, studying for her master’s in health behavior. Crossed Paths The couple met on Tinder in August 2017 when they were both living in Augusta, Georgia. They immediately started talking about what they had in common and decided to meet up for drinks. They bonded over Jeremy’s cooking skills and

Julia’s drive to help others, resulting in a successful first date. The couple say they’ve been inseparable ever since. The Proposal The couple attended homecoming weekend at Jeremy’s alma mater, Hampden-Sydney College, in October 2019, and Julia suspected a proposal was coming when Jeremy bought her a new outfit and paid for her to get her hair and nails done. Jeremy took Julia for a walk through campus to show her his favorite spots, including where he had shared an important moment with his father, Barry Hall, three years before. His father was stationed in Texas at the time, and his orders didn’t permit him to attend Jeremy’s graduation. Luckily, he was able to revise his orders and surprise Jeremy while he was standing in line to graduate. Julia was so caught up in Jeremy’s emotional story that when he led her a few steps away to stand under the bell tower and dropped down on one knee to propose, she was stunned. Their friends hid behind nearby trees to capture pictures of the moment. The Big Day The couple plans to have their reception and ceremony at the Bella Collina Mansion in Stokesdale, North Carolina.