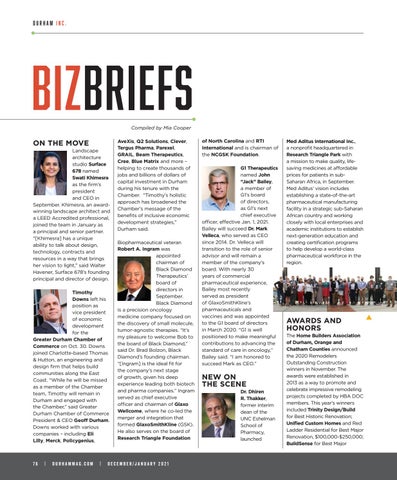 Landscape architecture studio Surface 678 named Swati Khimesra as the firm’s president and CEO in September. Khimesra, an awardwinning landscape architect and a LEED Accredited professional, joined the team in January as a principal and senior partner. “[Khimesra] has a unique ability to talk about design, technology, contracts and resources in a way that brings her vision to light,” said Walter Havener, Surface 678’s founding principal and director of design. Timothy Downs left his position as vice president of economic development for the Greater Durham Chamber of Commerce on Oct. 30. Downs joined Charlotte-based Thomas &amp; Hutton, an engineering and design firm that helps build communities along the East Coast. “While he will be missed as a member of the Chamber team, Timothy will remain in Durham and engaged with the Chamber,” said Greater Durham Chamber of Commerce President &amp; CEO Geoff Durham. Downs worked with various companies – including Eli Lilly, Merck, Policygenius,

AveXis, Q2 Solutions, Clever, Tergus Pharma, Parexel, GRAIL, Beam Therapeutics, Cree, Blue Matrix and more – helping to create thousands of jobs and billions of dollars of capital investment in Durham during his tenure with the Chamber. “Timothy’s holistic approach has broadened the Chamber’s message of the benefits of inclusive economic development strategies,” Durham said. Biopharmaceutical veteran Robert A. Ingram was appointed chairman of Black Diamond Therapeutics’ board of directors in September. Black Diamond is a precision oncology medicine company focused on the discovery of small molecule, tumor-agnostic therapies. “It’s my pleasure to welcome Bob to the board of Black Diamond,” said Dr. Brad Bolzon, Black Diamond’s founding chairman. “[Ingram] is the ideal fit for the company’s next stage of growth, given his deep experience leading both biotech and pharma companies.” Ingram served as chief executive officer and chairman of Glaxo Wellcome, where he co-led the merger and integration that formed GlaxoSmithKline (GSK). He also serves on the board of Research Triangle Foundation

of North Carolina and RTI International and is chairman of the NCGSK Foundation. G1 Therapeutics named John “Jack” Bailey, a member of G1’s board of directors, as G1’s next chief executive officer, effective Jan. 1, 2021. Bailey will succeed Dr. Mark Velleca, who served as CEO since 2014. Dr. Velleca will transition to the role of senior advisor and will remain a member of the company’s board. With nearly 30 years of commercial pharmaceutical experience, Bailey most recently served as president of GlaxoSmithKline’s pharmaceuticals and vaccines and was appointed to the G1 board of directors in March 2020. “G1 is well positioned to make meaningful contributions to advancing the standard of care in oncology,” Bailey said. “I am honored to succeed Mark as CEO.”