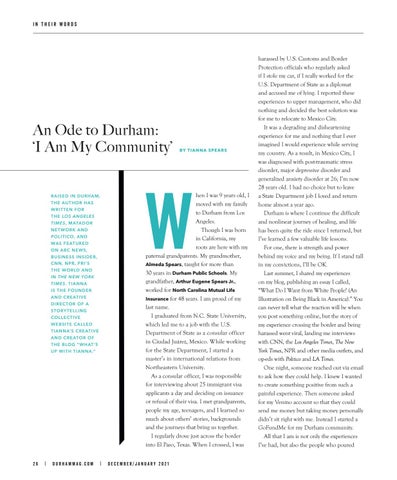 An Ode to Durham: ‘I Am My Community’

hen I was 9 years old, I moved with my family to Durham from Los Angeles. Though I was born in California, my roots are here with my paternal grandparents. My grandmother, Almeda Spears, taught for more than 30 years in Durham Public Schools. My grandfather, Arthur Eugene Spears Jr., worked for North Carolina Mutual Life Insurance for 48 years. I am proud of my last name. I graduated from N.C. State University, which led me to a job with the U.S. Department of State as a consular officer in Ciudad Juárez, Mexico. While working for the State Department, I started a master’s in international relations from Northeastern University. As a consular officer, I was responsible for interviewing about 25 immigrant visa applicants a day and deciding on issuance or refusal of their visa. I met grandparents, people my age, teenagers, and I learned so much about others’ stories, backgrounds and the journeys that bring us together. I regularly drove just across the border into El Paso, Texas. When I crossed, I was

B Y TIAN N A SPEARS

harassed by U.S. Customs and Border Protection officials who regularly asked if I stole my car, if I really worked for the U.S. Department of State as a diplomat and accused me of lying. I reported these experiences to upper management, who did nothing and decided the best solution was for me to relocate to Mexico City. It was a degrading and disheartening experience for me and nothing that I ever imagined I would experience while serving my country. As a result, in Mexico City, I was diagnosed with post-traumatic stress disorder, major depressive disorder and generalized anxiety disorder at 26; I’m now 28 years old. I had no choice but to leave a State Department job I loved and return home almost a year ago. Durham is where I continue the difficult and nonlinear journey of healing, and life has been quite the ride since I returned, but I’ve learned a few valuable life lessons. For one, there is strength and power behind my voice and my being. If I stand tall in my convictions, I’ll be OK. Last summer, I shared my experiences on my blog, publishing an essay I called, “What Do I Want from White People? (An Illustration on Being Black in America).” You can never tell what the reaction will be when you post something online, but the story of my experience crossing the border and being harassed went viral, landing me interviews with CNN, the Los Angeles Times, The New York Times, NPR and other media outlets, and op-eds with Politico and LA Times. One night, someone reached out via email to ask how they could help. I knew I wanted to create something positive from such a painful experience. Then someone asked for my Venmo account so that they could send me money but taking money personally didn’t sit right with me. Instead I started a GoFundMe for my Durham community. All that I am is not only the experiences I’ve had, but also the people who poured