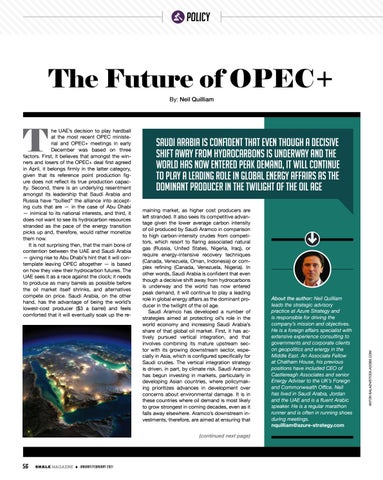 The Future of OPEC+ By: Neil Quilliam

About the author: Neil Quilliam leads the strategic advisory practice at Azure Strategy and is responsible for driving the company’s mission and objectives. He is a foreign affairs specialist with extensive experience consulting to governments and corporate clients on geopolitics and energy in the Middle East. An Associate Fellow at Chatham House, his previous positions have included CEO of Castlereagh Associates and senior Energy Adviser to the UK’s Foreign and Commonwealth Office. Neil has lived in Saudi Arabia, Jordan and the UAE and is a fluent Arabic speaker. He is a regular marathon runner and is often in running shoes during meetings. nquilliam@azure-strategy.com

he UAE’s decision to play hardball at the most recent OPEC ministerial and OPEC+ meetings in early December was based on three factors. First, it believes that amongst the winners and losers of the OPEC+ deal first agreed in April, it belongs firmly in the latter category, given that its reference point production figure does not reflect its true production capacity. Second, there is an underlying resentment amongst its leadership that Saudi Arabia and Russia have “bullied” the alliance into accepting cuts that are — in the case of Abu Dhabi — inimical to its national interests, and third, it does not want to see its hydrocarbon resources stranded as the pace of the energy transition picks up and, therefore, would rather monetize them now. It is not surprising then, that the main bone of contention between the UAE and Saudi Arabia — giving rise to Abu Dhabi’s hint that it will contemplate leaving OPEC altogether — is based on how they view their hydrocarbon futures. The UAE sees it as a race against the clock; it needs to produce as many barrels as possible before the oil market itself shrinks, and alternatives compete on price. Saudi Arabia, on the other hand, has the advantage of being the world’s lowest-cost producer ($3 a barrel) and feels comforted that it will eventually soak up the re- 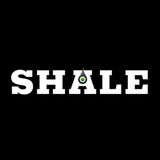