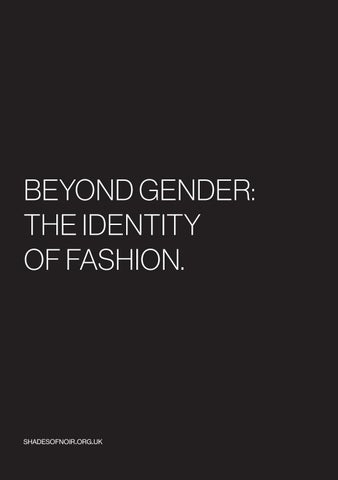 BEYOND GENDER: THE IDENTITY OF FASHION.

WELCOME. “We also use dress, consciously or unconsciously, as one of the ways in which we project ourselves, the self we wish to present to the world, the group with which we desire to be associated. It is a strong and visible part of our need to assert identity […] and thus forms part of our individuation” Unzipping Gender. C. Suthrell

Fashion is an ever growing and important form of our self expression. It is both a global phenomenon and a personal relationship. It is informed by our faiths, our orientations, our histories and our communities. It gives you the power to express yourself like nothing else, to break down social stereotypes, to stick to those who told you ‘No!’, and to be your beautiful self. With voices from the fashion, LGBTQ and creative industries, we will be discussing the use and impact of fashion as a construct and or a tool to share, support, include and or exclude.

Our Safe Space Policy. Shades of Noir is committed to providing an inclusive and supportive space for all attendees at our events. SoN believes all guests should be free from intimidation or harassment, resulting from prejudice or discrimination on the grounds of age, disability, marital or maternity/paternity status, race, religious beliefs, sexual orientation, gender identity, trans status, socio-economic status, or ideology or culture, or any other form of distinction. 2 // BEYOND GENDER: THE IDENTITY OF FASHION.

OUR PANELISTS. Travis Alabanza. Travis is a Black queer femme performance artist living, studying and creating in London, and is currently the LGBT+ president at kingâ&#x20AC;&#x2122;s college London. Their work has featured in The UK anthology Black & Gay in the UK, as well as Manon, Queer Contemporary, Black girl Dangerous and Beyond the Binary. They have performed in venues across the UK including RVT, Hackney Attic, Oxford Queer Week & their one person show in Bristol Stories of a Queer Brown Muddy Kid. They feel their art is a way to talk unapologetically about the love queer black bodies outside of binaries deserve. https://soundcloud.com/travisalabanza

SA Smythe. SA is a current Visiting Fellow at the University of Londonâ&#x20AC;&#x2122;s Institute of Modern Languages Research. Their scholarship focusses on the aesthetics of Black and queer liberation, the politics of citizenship and place-making, and narratives of migration and postcoloniality in the Mediterranean. SA also does translation work and organises in queer of colour feminist writing collectives in the US, Italy, and Berlin. A new collection of multilingual prose poems and critical essays on pleasure, absence, and aberrance is forthcoming in 2016. SA is a part of the soft anonymous, a transnational QTPOC literary collective and is the publishing editor of THEM: Trans Literary Journal.

Raju Rage. Raju is an interdisciplinary artist who uses art and activism to forge creative survival. They are interested in the role of art in social change, transformative healing justice and in collectivity. They are focused on knowledge and creative production both inside but mostly outside of academia and institutions, within pro/ active creative and activist communities. Their work interrogates the ways in which contemporary diasporan identities are constructed and read/misread through BEYOND GENDER: THE IDENTITY OF FASHION. // 3

history and memory, in/visibility and the effect of politics, space, symbolism, stereotypes, ethnic codes, ideology and gazes on the body. They use sculpture, collage and ritual mediums and work in live art, performance and moving image, focusing on de-con-structive techniques of resistance such as interruption, confusion, disturbance. They primarily use their non-conforming body as a vehicle of assemblage and embodiment.

Montana is a graduate of Central St. Martins. She studied BA Textiles knitwear. She is best known for her collaborative work with designers such as Jasper Garvida and Bryce Aice Qime. Her work is a combination of hand knitting and crochet, she creates three dimensional pieces, she has also won the UK Hand knitting Association Award 2011 for her innovation in knitwear. Her award winning work marries elements of sustainability and fashion, her work questions the social issues of waste within the fashion industry.

Katy Jalili. Katy Jalili (Katayoun Jalilipour) is an artist and writer, Currently studying Performance Design and Practice at Central Saint Martins. She is focusing her research on womenâ&#x20AC;&#x2122;s and QPOCSâ&#x20AC;&#x2122; place in contemporary performing arts, and the meaning of Feminist Art in activism. She is very interested in discovering borderlines between Fine Arts and Performing arts. Her ambitions include leading an independent Arts Collective which allows a more diverse and accessible environment for developing artists. https://katyjalili.tumblr.com/

4 // BEYOND GENDER: THE IDENTITY OF FASHION.

KEY WORDS. Identity is a very broad spectrum of study and the lexicon is growing constantly. During this conversation, there will be a number of times that the following words will emerge.

Pronouns A word that can function as a noun phrase used by itself and that refers either to the participants in the discourse. People with various gender identities choose pronouns they feel comfortable with, some people may have more than one pronoun.

Sexuality Refers to a personâ&#x20AC;&#x2122;s sexual orientation/preferences in terms of sexual activities.

Sexual Orientations A personâ&#x20AC;&#x2122;s sexual identity in relation to the gender to which they are attracted.

Gender Gender is a an expression of the reenactment of certain roles it may differ from time to time.

Trans Male A transgender person who was assigned female at birth but whose gender identity is that of a man.

6 // BEYOND GENDER: THE IDENTITY OF FASHION.

Trans Female A transgender person who was assigned male at birth but whose gender identity is that of a woman.

Binary The classification of sex and gender into two distinct, opposite and disconnected forms of masculine and feminine.

Non-Binary A form gender identity which reject the gender binary.

Femininity Repeated performances of the female gender; these performances reproduce and define the traditional categories.

Masculinity The combination of socially-defined and biological factors, distinct from the definition of the male biological sex.

Black A member of a dark-skinned people, especially one of African or Australian Aboriginal ancestry. A term used in certain countries, often in socially based systems of racial classification or of ethnicity.

Desi Person of Indian, Pakistani, or Bangladeshi birth or descent who lives abroad.

East-Asian In general terms, consists of China, Hong Kong, Macao, Taiwan, Japan,South Korea and North Korea; sometimes, Mongolia and Vietnam are included in the definition. BEYOND GENDER: THE IDENTITY OF FASHION. // 7

Privilege A special right, advantage, or immunity granted or available only to a particular person or group.

Oppression Prolonged cruel or unjust treatment or exercise of authority.

Homophobia Prejudice against the queer community

Transphobia Prejudice against the Trans community

Racism The belief that all members of each race possess characteristics, abilities, or qualities specific to that race, especially so as to distinguish it as inferior or superior to another race or races

Prejudice Hatred towards someone based on their identity. Example: An oppressed person of colour can be prejudice against privileged races but cannot be racist.

8 // BEYOND GENDER: THE IDENTITY OF FASHION.

BEYOND GENDER: THE IDENTITY OF FASHION. // 9

10 // BEYOND GENDER: THE IDENTITY OF FASHION.

BEYOND GENDER: THE IDENTITY OF FASHION. // 11

HELPFUL ORGANISATIONS. UAL LGBTQ. A student network which aims to brings together lesbians, gays, bisexuals, members of the trans community, queers, asexuals, intersexuals, curious people, all those without a label and everyone in between across UAL! www.suarts.org/groups/lgbtq-society

The UAL Diversity Team. A service that provides advice and guidance to LGBTQ+ students and staff. www.arts.ac.uk/about-ual/diversity/

Supporting Trans Students at UAL. The University’s ‘Supporting Trans Students’ guide sets out how we support students through gender reassignment. Students can contact the Diversity Team for more information diversity@arts.ac.uk or search ‘supporting trans students’ on the UAL intranet. myintranet.arts.ac.uk/staffandstudents/diversity/gender-identity/supporting-trans-students/

Gendered Intelligence. An organisation that aims to raise awareness of the needs of young trans* people 12 // BEYOND GENDER: THE IDENTITY OF FASHION.

through training initiatives, creative workshops and the provision of advice and guidance to young people. www.genderedintelligence.co.uk

Gender Trust. An organisation that aims to help adults throughout the United Kingdom who areTranssexual, Gender Dysphoric, Transgender or those whose lives are affected by gender identity issues. www.gendertrust.org.uk

Imaan. A social support group for lesbian, gay, bisexual, and transgender Muslims, their families, friends and supporters, and those questioning their sexuality or gender identity. www.imaan.org.uk

Press for Change. A political lobbying and educational organisation that campaigns to achieve equal right for trans* people in the UK through legislation and social change. www.pfc.org.uk

Stonewall. An organisation that is the UKâ&#x20AC;&#x2122;s largest LGBTQ+ rights charity, providing information and support to individuals and organisations, and lobbying government on equality in relation to sexual orientation and gender identity. www.stonewall.org.uk/

BEYOND GENDER: THE IDENTITY OF FASHION. // 13

LGBT+ switchboard An organisation that provides an information, support and referral service for lesbians, gay men and bisexual and trans* people â&#x20AC;&#x201C; and anyone considering issues around their sexuality and/or gender identity. switchboard.lgbt/

Nails Transphobia Nail Transphobia tackles transphobia through nail art; it is fabulous activism! Charlie Craggs travels around with her pop up nail salon and strangers can come and get their nails done for free. http://nailtransphobia.com/

14 // BEYOND GENDER: THE IDENTITY OF FASHION.

FURTHER READING. All resources are avalible in the UAL Libary system or online

Web Feminist Perspectives on Sex and Gender Available at: http://plato.stanford.edu/entries/feminism-gender/#GenTerWhat is masculinity? 16 // BEYOND GENDER: THE IDENTITY OF FASHION.

18 // BEYOND GENDER: THE IDENTITY OF FASHION.

BEYOND GENDER: THE IDENTITY OF FASHION. // 19

Beyond Gender: The Identity of Fashion Â© Shades of Noir 2016 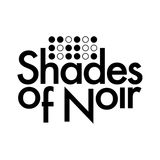 Beyond Gender: The Identity of Fashion

“We also use dress, consciously or unconsciously, as one of the ways in which we project ourselves, the self we wish to present to the world...

Beyond Gender: The Identity of Fashion

“We also use dress, consciously or unconsciously, as one of the ways in which we project ourselves, the self we wish to present to the world...