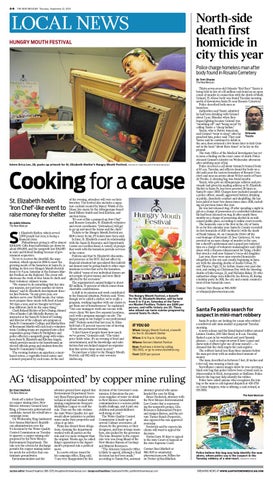 Cooking for a cause St. Elizabeth holds ‘Iron Chef’-like event to raise money for shelter

of the evening, attendees will vote on their favorites. The festival also includes a signature cocktail created by Marcy Walsh of Zia Diner, live music by the Albuquerque-based band Hillary Smith and Soul Kitchen, and auction items. “It’s sort of like a pumped-up Iron Chef,” said Rosario Gonzales, St. Elizabeth volunteer By Adele Oliveira The New Mexican and event coordinator. “[Attendees] will get to go up and meet the teams and the chefs.” Tickets to the Hungry Mouth Festival are t. Elizabeth Shelter, which served $100 a head. So far, 175 tickets have been sold. 2,000 people last year, is facing a In June, St. Elizabeth ceased its relationship financial crisis. Philanthropic giving is off by almost with the Santa Fe Resource and Opportunity $200,000. Gifts from individuals are down by Center on Cerrillos Road. A variety of groups about $90,000, and the nonprofit lost $36,000 that work with the homeless provide services in state and federal funding because of govat the center. ernment sequesters. Podesta said that St. Elizabeth’s discontinTo try to recover the shortfall, the orgaued presence at the ROC did not affect its nization, which opened in 1986 to meet the financial situation but speculated that individgrowing needs of the homeless in Santa Fe, is ual donors may be giving funds to other orgaholding its first ever Hungry Mouth Festival nizations in town that serve the homeless. from 6 to 9 p.m. Saturday at the Farmers Mar- He added “many of our individual donors are ket Pavilion on the Railyard. The event will not people of great means and were likely showcase the work of four Santa Fe chefs and affected by the recession.” their volunteer culinary teams. The organization’s annual budget is about “We wanted to do something that ties into $13 million, 70 percent of which comes from our mission, not just have another sit-down charitable contributions. dinner,” said St. Elizabeth development direcA shift in its mission and work contributed tor Jim Podesta. “In any given year, our to the financial situation, Podesta said. “Even shelters serve over 50,000 meals. Our volunthough we’re called a shelter, we’re really a teers prepare these meals with food at hand program, working together with our clients to 365 days a year, and we thought we’d have get them out of homelessness,” he explained. four different chefs do the same thing.” Chefs Roland Richter of Joe’s Dining; Ahmed “Our case managers work one-on-one with every client. We have five separate locations, Obo of Jambo Café; Michelle Roetzer, an each with a program manager on-site. The instructor at the Santa Fe School of Cooking biggest jump in our budget is our professional and director of the culinary arts program at Santa Fe Community College; and Martin Ríos staff.” Podesta noted that last year, St. Elizaof Restaurant Martin will each lead a volunteer beth had a 52 percent success rate of moving clients into permanent housing. team. Cooking teams are organized into a first “I don’t know if people know how much responders group (Santa Fe firefighters and we’ve grown,” Gonzales said. “The ticket police officers); a nonprofit group with volunprice holds value. It’s an evening of food and teers from St. Elizabeth and Kitchen Angels, entertainment, and the knowledge and satiswhich provides meals to the homebound; an faction that you helped support an organizaelected officials group and students from the tion that serves those most in need.” Santa Fe Community College. To purchase a ticket to the Hungry Mouth The evening features an appetizer, a meatFestival, call 982-6611 or visit www.ste based entree, a vegetable-based entree and shelter.org. a dessert prepared by each team. At the end

The Hungry Mouth Festival, a benefit for the St. Elizabeth Shelter, will be held from 6 to 9 p.m. Saturday at the Farmers Market Pavilion. Tickets are $100 per person, and raffle tickets are $5. Those who attend can taste cuisine prepared by several Santa Fe chefs.

if you go What: Hungry Mouth Festival, a benefit for the St. Elizabeth Shelter When: 6 to 9 p.m. Saturday Where: Farmers Market Pavilion How: Purchase a ticket by calling 982-6611, or go to www.steshelter.org. Cost: $100 per person

AG ‘disappointed’ by copper mine ruling attorney general have argued that Environment Department Secretary Ryan Flynn ignored his own Fresh off a defeat Tuesday technical staff and worked with on copper mining rules, New mining conglomerate FreeportMexico Attorney General Gary McMoRan Copper to craft the King, a Democratic gubernatorial rule. They say the rule violates candidate, turned the rebuff into a the state Water Quality Act and campaign issue. would allow industries to pollute On Wednesday, King lambasted water under their properties and Gov. Susana Martinez’s Republiclean it up later. can administration over the Flynn has denied those allega9-1 decision by the Water Quality tions, claiming the department Control Commission on Tuesday worked with all parties on the to approve a copper mining rule rule and it is more stringent than proposed by the New Mexico the original. Weeks ago, he called Environment Department. The King’s opposition to the departrule sets the criteria for discharge ment’s proposed rule a political permits the copper mining indus- move. try needs for activities that conIn a news release issued by taminate groundwater. his campaign office, King said, Environmentalists and the “I am very disappointed by this By Staci Matlock The New Mexican

decision of the Governor’s commission. It threatens the precious supplies of water we drink in New Mexico. Groundwater contamination is a serious public health challenge, and it puts our children and grandchildren’s well-being at risk.” The Water Quality Control Commission is made up of several Cabinet secretaries, all chosen by the governor, or their designees, and four at-large members, also picked by the governor. The lone dissenter in the copper rule vote was Doug Bland of the New Mexico Bureau of Geology and Mineral Resources. “The Attorney General’s Office is likely to appeal, although a final decision has not been made,” according to Tannis Fox, assistant

attorney general who spearheaded the case for King. Bruce Frederick, attorney with the New Mexico Environmental Law Center that is representing the nonprofit groups, Gila Resources Information Project and Amigos Bravos, and the private Turner Ranch Properties, also opposed the rule approved yesterday. Frederick said he expects his clients will want to appeal the decision. Parties have 30 days to appeal to the state Court of Appeals or the state Supreme Court. Contact Staci Matlock at 986-3055 or smatlock@ sfnewmexican.com. Follow her on Twitter @StaciMatlock.

Thirty-seven-year-old Orlando “Red Eyes” Yazzie is being held in lieu of a $1 million cash bond on an open count of murder in connection with the death of Mark Grinnel, 55, whose body was found Tuesday morning north of downtown Santa Fe near Rosario Cemetery. Police described both men as homeless. Authorities said Yazzie admitted he had been drinking with Grinnel about 3 p.m. Monday when they began fighting because Grinnel was “mouthing off” and “being racial” by calling Yazzie a “cheap Indian.” Yazzie, who is Native American, said Grinnel “went to sleep” after he Orlando Yazzie punched him, police said. They said Yazzie said he continued to drink in the area, then returned a few hours later to kick Grinnel in the head “about three times” as he lay on the ground. The state Office of the Medical Investigator has yet to issue a finding on the exact cause of death. Police released Grinnel’s identity on Wednesday afternoon after notifying next of kin. Police received a call about Grinnel’s bruised body at 10 a.m. Tuesday, and officers found the body on a dirt path near the eastern boundary of Rosario Cemetery and near an arroyo about 50 feet north of Paseo de Peralta. A sleeping bag was found nearby. Yazzie, who gave an Albuquerque address and previously had given his mailing address as St. Elizabeth Shelter in Santa Fe, has been arrested 28 times in Santa Fe since 2010. Charges have included assault on a police officer, assault, aggravated battery, drinking in public, disorderly conduct and shoplifting. He has been jailed at least two dozen times since 2010, including six previous times this year. He was last released Aug. 29 after spending a night in jail on a charge of possession of a controlled substance. He had been released on Aug. 16 after nearly three months on a charge of possessing alcohol in an unlicensed public place, according to online court records. The homicide case is the first in the city of Santa Fe so far this calendar year. Santa Fe County recorded its first homicide of 2013 on March 1 with the death of Frank Salazar, 44, on Comanche Drive off the east frontage of Interstate 25. Jose Gutierrez, 54, was arrested on an open charge of murder in the case, but a sheriff’s spokesman said a grand jury indicted him on a charge of voluntary manslaughter and child abuse with a firearm enhancement for firing a bullet that struck a wall near Salazar’s 3-year-old daughter. Last year, there were nine reported homicides altogether in the city and county, beginning in January with the shooting deaths of Austin Urban, 29, and Theresa Vigil, 51, by Arthur Anaya over past-due rent, and ending on Christmas Day with the shooting deaths of John Griego, 23, and Nicholas Baker, 29, who authorities allege were killed by Joe Rivera, 18, during a holiday party. In 2011, the city and county counted a total of four homicide cases.

Santa Fe police search for suspect in mini-mart robbery Santa Fe police are looking for a man who robbed a southwest-side mini-market at gunpoint Tuesday morning. A news release said the blond-haired robber entered Latinos Unidos, 1242 Siler Road, at 11 a.m. Tuesday, flashed a gun in his waistband and used Spanish phrases — such as tengo un arma (I have a gun) and dame todo el dinero (give me all your money) — to demand that the clerk empty the cash register. The robbery lasted less than three minutes before the man got away with an undisclosed amount of money. The man, described as between 5 feet, 10 inches and 6 feet tall, was wearing a black cap. Surveillance camera images show he was carrying a black tote bag that police believe bore a brand such as Abercrombie &amp; Fitch, Aeropostale or Hollister. Police believe the bag may help identify the robber. Police have asked anyone who recognizes the tote bag or the man to call regional dispatch at 428-3710 or Crime Stoppers, who is offering a cash reward, at 955-5050. The New Mexican

d Police believe this bag may help identify the man above, whom police say is the suspect in the Tuesday robbery of a mini-mart. COURTESY PHOTO 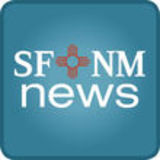