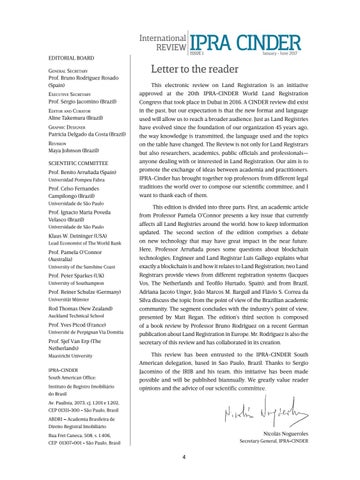 Letter to the reader This electronic review on Land Registration is an initiative approved at the 20th IPRA-CINDER World Land Registration Congress that took place in Dubai in 2016. A CINDER review did exist in the past, but our expectation is that the new format and language used will allow us to reach a broader audience. Just as Land Registries have evolved since the foundation of our organization 45 years ago, the way knowledge is transmitted, the language used and the topics on the table have changed. The Review is not only for Land Registrars but also researchers, academics, public officials and professionals— anyone dealing with or interested in Land Registration. Our aim is to promote the exchange of ideas between academia and practitioners. IPRA-Cinder has brought together top professors from different legal traditions the world over to compose our scientific committee, and I want to thank each of them. This edition is divided into three parts. First, an academic article from Professor Pamela O’Connor presents a key issue that currently affects all Land Registries around the world: how to keep information updated. The second section of the edition comprises a debate on new technology that may have great impact in the near future. Here, Professor Arruñada poses some questions about blockchain technologies; Engineer and Land Registrar Luis Gallego explains what exactly a blockchain is and how it relates to Land Registration; two Land Registrars provide views from different registration systems (Jacques Vos, The Netherlands and Teofilo Hurtado, Spain); and from Brazil, Adriana Jacoto Unger, João Marcos M. Barguil and Flávio S. Correa da Silva discuss the topic from the point of view of the Brazilian academic community. The segment concludes with the industry’s point of view, presented by Matt Regan. The edition’s third section is composed of a book review by Professor Bruno Rodriguez on a recent German publication about Land Registration in Europe. Mr. Rodriguez is also the secretary of this review and has collaborated in its creation. This review has been entrusted to the IPRA-CINDER South American delegation, based in Sao Paulo, Brazil. Thanks to Sergio Jacomino of the IRIB and his team, this initiative has been made possible and will be published biannually. We greatly value reader opinions and the advice of our scientific committee. 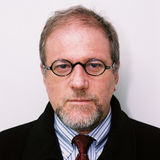 The use of blockchain in real estate registration activities.

The use of blockchain in real estate registration activities.