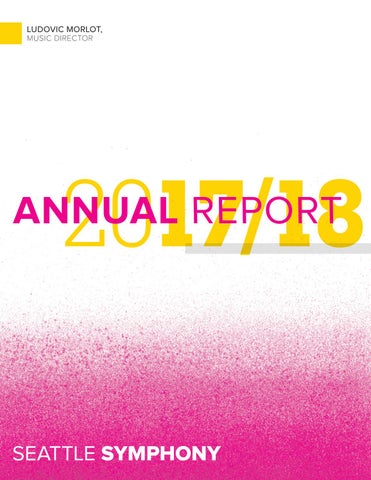 Dear friends, On behalf of the entire Seattle Symphony and Benaroya Hall organization, I’m pleased to present this report for the 2017–2018 fiscal year, including artistic and community highlights, financial results, and our gratitude to you for your steadfast support of this community treasure. The 2017–2018 season was one of change and renewal with René Ancinas beginning his leadership tenure as Board Chair-Elect in September 2017; a new Music Director Designate, Thomas Dausgaard, announced in October 2017, who will take up his post in September 2019; and the news of my appointment in June 2018. Throughout these changes in our three most pivotal leadership positions, the organization remained committed to the mission, vision and values set in place by our predecessors, and as we move forward into creating our next strategic plan, these same values of excellence, innovation, curiosity, collaboration, inclusivity, respect, integrity and service will remain at the center of all we do. Our appreciation first and foremost goes to our Music Director Ludovic Morlot, who concludes his tenure with the Seattle Symphony in June 2019, and the conducting staff, orchestra and chorale for their excellent music-making both in Benaroya Hall and across the community. During the 2017–2018 season, Ludovic and the orchestra had an outstanding year, presenting three orchestral world premieres including John Luther Adams’ Become Desert, Alexandra Gardner’s Significant Others and David Lang’s symphony without a hero. Ludovic and the orchestra also 2 2017–2018 ANNUAL REPORT

performed in Las Vegas, Palm Desert and had a two-day residency at the University of California, Berkeley, to rave reviews. Ludovic Morlot led our audiences on an exploration of the music of Hector Berlioz, including Berlioz’s Requiem, Symphonie fantastique, Les nuits d’été and The Death of Cleopatra. Additional explorations into the works of specific composers included the Prokofiev Concerto Festival, led by Associate Conductor Pablo Rus Broseta, and the Vivaldi Project, led by violinist, conductor and countertenor Dmitry Sinkovsky. A major highlight of the season was the stunning retelling of Stravinsky’s Persephone featuring life-sized puppetry and creative set design by renowned film and theater designer Michael Curry. Your dedicated support has been critical for the success of these exciting projects, which moved the hearts of audience members. Our work reached well beyond Benaroya Hall, including our Community Connections program, in which we partner with over 70 nonprofit organizations across six sectors including youth, cultural, health services, seniors, social services, and active military and veterans. In the 2017– 2018 season, the Symphony gave 2,438 concert tickets to community members through this program. In addition, our in-depth projects such as the Lullaby Project and Prison Visits further enhanced the orchestra’s presence and work in the community.

Last season’s Simple Gifts projects, which supports people experiencing homelessness through music and creative work, focused on youth homelessness, which impacts nearly 1,500 youth and young adults in King County on any given night. Our Composer in Residence Alexandra Gardner worked with youth from community partners Accelerator YMCA, New Horizons and Youthcare to create a new composition, Stay Elevated, which was performed by Seattle Symphony musicians at the Seattle Art Museum.

While overall expenses increased by 5%, this was planned, mostly due to increased personnel costs, and expenses stayed within budget.

In addition to these and other service projects involving the board, staff and musicians, Seattle Symphony Volunteers logged an incredible 10,260 hours in service to the organization during the 2017–2018 season, equivalent to almost $297,437. We are so grateful for the volunteers’ substantial contribution to the organization.

Benaroya Hall is known as one of the finest concert halls in the world. We were thrilled to welcome 457,167 people attending 487 public or private events at Benaroya Hall last season. The operating budget for Benaroya Hall in the 2017–2018 season was $3.6 million, with a surplus of $278,817. We have continued to provide funding for ongoing leasehold improvements and capital renewal reserves to ensure that Benaroya Hall is maintained as a world-class facility. Our Live @ Benaroya Hall series, now in its sixth season, presented an exciting and diverse lineup of jazz, rock, blues, country, pop, alternative and world music.

Link Up concerts for 3rd through 5th graders served 10,000 students, who had the incredible experience of playing recorders and singing with the orchestra in Benaroya Hall. This curriculum, provided by Carnegie Hall, is a cornerstone of the Symphony’s work with students from across the region, providing the building blocks for a lifetime of creativity through music.

Coming into this organization as a new leader, it was very evident to me that our entire organization and Symphony supporters have rallied around these projects, our mission and values, which truly brings the Symphony into the heart of this community. This is also clear in our overall financial results which show a balanced budget. After special fundraising and other non-operating activities, our season resulted in a positive change in net assets of $2.5 million.

In closing, we thank you for your steadfast support of this wonderful organization.

We extend our most sincere thanks to the more than 8,433 individuals and companies who supported the orchestra last season, providing vital funding for the concerts and programs enjoyed by thousands of our community members. In the 2017–2018 season, Annual Fund donations, sponsorships, grants and attendance at special events totaled $11.2 million, an increase of 7% from last year. In addition, we received $3.1 million in special fundraising for current needs and future sustainability. Thanks to the support of our dedicated audiences, our total performance revenue was $13.6 million, an increase of 5% from the prior year.

As we say farewell to our Music Director Ludovic Morlot this spring and prepare to welcome our Music Director Designate Thomas Dausgaard this fall, we know that our next chapter holds great promise for an exciting future. Your support is critical to our success. It is only with dedicated people like you at our side that we can bring this music to our community. With gratitude,

* The financial statements have been reformatted to streamline operating vs non-operating activities including those from special fundraising, capital expenditures and pension liability

Seattle Symphony Board of Directors as of March 2019

Our Mission THE SEATTLE SYMPHONY UNLEASHES THE POWER OF MUSIC, BRINGS PEOPLE TOGETHER, AND LIFTS THE HUMAN SPIRIT 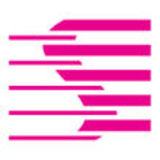