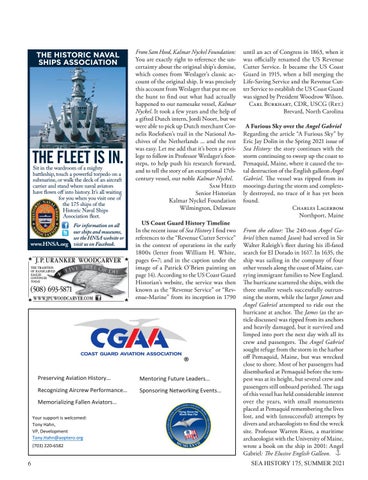 From Sam Heed, Kalmar Nyckel Foundation: You are exactly right to reference the uncertainty about the original ship’s demise, which comes from Weslager’s classic account of the original ship. It was precisely this account from Weslager that put me on the hunt to find out what had actually happened to our namesake vessel, Kalmar Nyckel. It took a few years and the help of a gifted Dutch intern, Jordi Noort, but we were able to pick up Dutch merchant Cornelis Roelofsen’s trail in the National Archives of the Netherlands ... and the rest was easy. Let me add that it’s been a privilege to follow in Professor Weslager’s footsteps, to help push his research forward, and to tell the story of an exceptional 17thcentury vessel, our noble Kalmar Nyckel. Sam Heed Senior Historian Kalmar Nyckel Foundation Wilmington, Delaware

US Coast Guard History Timeline In the recent issue of Sea History I find two references to the “Revenue Cutter Service” in the context of operations in the early 1800s (letter from William H. White, pages 6–7; and in the caption under the image of a Patrick O’Brien painting on page 14). According to the US Coast Guard Historian’s website, the service was then known as the “Revenue Service” or “Revenue-Marine” from its inception in 1790

until an act of Congress in 1863, when it was officially renamed the US Revenue Cutter Service. It became the US Coast Guard in 1915, when a bill merging the Life-Saving Service and the Revenue Cutter Service to establish the US Coast Guard was signed by President Woodrow Wilson. Carl Burkhart, CDR, USCG (Ret.) Brevard, North Carolina A Furious Sky over the Angel Gabriel Regarding the article “A Furious Sky” by Eric Jay Dolin in the Spring 2021 issue of Sea History: the story continues with the storm continuing to sweep up the coast to Pemaquid, Maine, where it caused the total destruction of the English galleon Angel Gabriel. The vessel was ripped from its moorings during the storm and completely destroyed, no trace of it has yet been found. Charles Lagerbom Northport, Maine From the editor: The 240-ton Angel Gabriel (then named Jason) had served in Sir Walter Raleigh’s fleet during his ill-fated search for El Dorado in 1617. In 1635, the ship was sailing in the company of four other vessels along the coast of Maine, carrying immigrant families to New England. The hurricane scattered the ships, with the three smaller vessels successfully outrunning the storm, while the larger James and Angel Gabriel attempted to ride out the hurricane at anchor. The James (as the article discusses) was ripped from its anchors and heavily damaged, but it survived and limped into port the next day with all its crew and passengers. The Angel Gabriel sought refuge from the storm in the harbor off Pemaquid, Maine, but was wrecked close to shore. Most of her passengers had disembarked at Pemaquid before the tempest was at its height, but several crew and passengers still onboard perished. The saga of this vessel has held considerable interest over the years, with small monuments placed at Pemaquid remembering the lives lost, and with (unsuccessful) attempts by divers and archaeologists to find the wreck site. Professor Warren Riess, a maritime archaeologist with the University of Maine, wrote a book on the ship in 2001: Angel Gabriel: The Elusive English Galleon. SEA HISTORY 175, SUMMER 2021