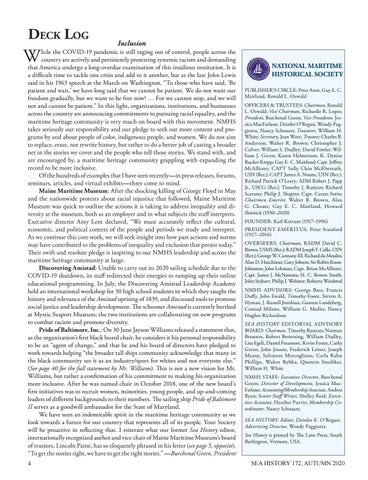 hile the COVID-19 pandemic is still raging out of control, people across the country are actively and persistently protesting systemic racism and demanding that America undergo a long-overdue examination of this insidious institution. It is a difficult time to tackle one crisis and add to it another, but as the late John Lewis said in his 1963 speech at the March on Washington, “To those who have said, ‘Be patient and wait,’ we have long said that we cannot be patient. We do not want our freedom gradually, but we want to be free now! … For we cannot stop, and we will not and cannot be patient.” In this light, organizations, institutions, and businesses across the country are announcing commitments to pursuing racial equality, and the maritime heritage community is very much on board with this movement. NMHS takes seriously our responsibility and our pledge to seek out more content and programs by and about people of color, indigenous people, and women. We do not aim to replace, erase, nor rewrite history, but rather to do a better job of casting a broader net in the stories we cover and the people who tell those stories. We stand with, and are encouraged by, a maritime heritage community grappling with expanding the record to be more inclusive. Of the hundreds of examples that I have seen recently—in press releases, forums, seminars, articles, and virtual exhibits—three come to mind. Maine Maritime Museum: After the shocking killing of George Floyd in May and the nationwide protests about racial injustice that followed, Maine Maritime Museum was quick to outline the actions it is taking to address inequality and diversity at the museum, both as an employer and in what subjects the staff interprets. Executive director Amy Lent declared, “We must accurately reflect the cultural, economic, and political context of the people and periods we study and interpret. As we continue this core work, we will seek insight into how past actions and norms may have contributed to the problems of inequality and exclusion that persist today.” Their swift and resolute pledge is inspiring to our NMHS leadership and across the maritime heritage community at large. Discovering Amistad: Unable to carry out its 2020 sailing schedule due to the COVID-19 shutdown, its staff redirected their energies to ramping up their online educational programming. In July, the Discovering Amistad Leadership Academy held an international workshop for 30 high school students in which they taught the history and relevance of the Amistad uprising of 1839, and discussed tools to promote social justice and leadership development. The schooner Amistad is currently berthed at Mystic Seaport Museum; the two institutions are collaborating on new programs to combat racism and promote diversity. Pride of Baltimore, Inc.: On 30 June Jayson Williams released a statement that, as the organization’s first black board chair, he considers it his personal responsibility to be an “agent of change,” and that he and his board of directors have pledged to work towards helping “the broader tall ships community acknowledge that many in the black community see it as an industry/sport for whites and not everyone else.” (See page 40 for the full statement by Mr. Williams). This is not a new vision for Mr. Williams, but rather a confirmation of his commitment to making his organization more inclusive. After he was named chair in October 2018, one of the new board’s first initiatives was to recruit women, minorities, young people, and up-and-coming leaders of different backgrounds to their numbers. The sailing ship Pride of Baltimore II serves as a goodwill ambassador for the State of Maryland. We have seen an indomitable spirit in the maritime heritage community as we look towards a future for our country that represents all of its people. Your Society will be proactive in reflecting that. I reiterate what our former Sea History editor, internationally recognized author and vice chair of Maine Maritime Museum’s board of trustees, Lincoln Paine, has so eloquently phrased in his letter (see page 5, opposite), “To get the stories right, we have to get the right stories.” —Burchenal Green, President 4