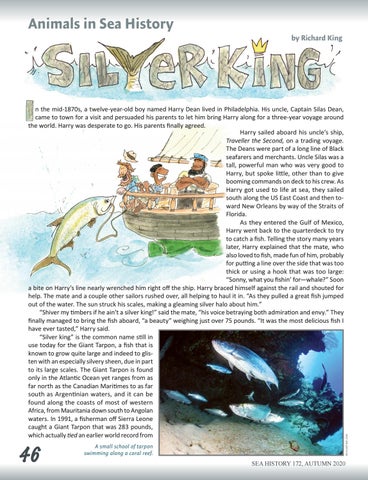 n the mid-1870s, a twelve-year-old boy named Harry Dean lived in Philadelphia. His uncle, Captain Silas Dean, came to town for a visit and persuaded his parents to let him bring Harry along for a three-year voyage around the world. Harry was desperate to go. His parents finally agreed. Harry sailed aboard his uncle’s ship, Traveller the Second, on a trading voyage. The Deans were part of a long line of Black seafarers and merchants. Uncle Silas was a tall, powerful man who was very good to Harry, but spoke little, other than to give booming commands on deck to his crew. As Harry got used to life at sea, they sailed south along the US East Coast and then toward New Orleans by way of the Straits of Florida. As they entered the Gulf of Mexico, Harry went back to the quarterdeck to try to catch a fish. Telling the story many years later, Harry explained that the mate, who also loved to fish, made fun of him, probably for putting a line over the side that was too thick or using a hook that was too large: “Sonny, what you fishin’ for—whale?” Soon a bite on Harry’s line nearly wrenched him right off the ship. Harry braced himself against the rail and shouted for help. The mate and a couple other sailors rushed over, all helping to haul it in. “As they pulled a great fish jumped out of the water. The sun struck his scales, making a gleaming silver halo about him.” “Shiver my timbers if he ain’t a silver king!” said the mate, “his voice betraying both admiration and envy.” They finally managed to bring the fish aboard, “a beauty” weighing just over 75 pounds. “It was the most delicious fish I have ever tasted,” Harry said. “Silver king” is the common name still in use today for the Giant Tarpon, a fish that is known to grow quite large and indeed to glisten with an especially silvery sheen, due in part to its large scales. The Giant Tarpon is found only in the Atlantic Ocean yet ranges from as far north as the Canadian Maritimes to as far south as Argentinian waters, and it can be found along the coasts of most of western Africa, from Mauritania down south to Angolan waters. In 1991, a fisherman off Sierra Leone caught a Giant Tarpon that was 283 pounds, which actually tied an earlier world record from

A small school of tarpon swimming along a coral reef.