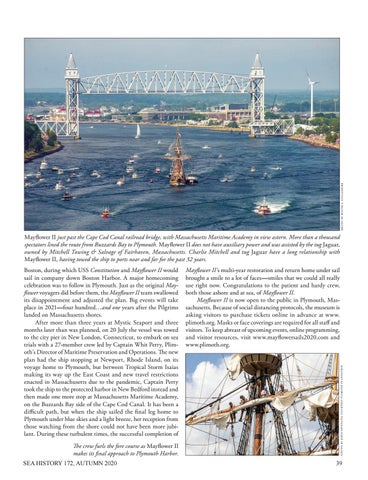 Mayflower II just past the Cape Cod Canal railroad bridge, with Massachusetts Maritime Academy in view astern. More than a thousand spectators lined the route from Buzzards Bay to Plymouth. Mayflower II does not have auxiliary power and was assisted by the tug Jaguar, owned by Mitchell Towing &amp; Salvage of Fairhaven, Massachusetts. Charlie Mitchell and tug Jaguar have a long relationship with Mayflower II, having towed the ship to ports near and far for the past 32 years.

The crew furls the fore course as Mayflower II makes its final approach to Plymouth Harbor.

Mayflower II’s multi-year restoration and return home under sail brought a smile to a lot of faces—smiles that we could all really use right now. Congratulations to the patient and hardy crew, both those ashore and at sea, of Mayflower II. Mayflower II is now open to the public in Plymouth, Massachusetts. Because of social distancing protocols, the museum is asking visitors to purchase tickets online in advance at www. plimoth.org. Masks or face coverings are required for all staff and visitors. To keep abreast of upcoming events, online programming, and visitor resources, visit www.mayflowersails2020.com and www.plimoth.org.

Boston, during which USS Constitution and Mayflower II would sail in company down Boston Harbor. A major homecoming celebration was to follow in Plymouth. Just as the original Mayflower voyagers did before them, the Mayflower II team swallowed its disappointment and adjusted the plan. Big events will take place in 2021—four hundred…and one years after the Pilgrims landed on Massachusetts shores. After more than three years at Mystic Seaport and three months later than was planned, on 20 July the vessel was towed to the city pier in New London, Connecticut, to embark on sea trials with a 27-member crew led by Captain Whit Perry, Plimoth’s Director of Maritime Preservation and Operations. The new plan had the ship stopping at Newport, Rhode Island, on its voyage home to Plymouth, but between Tropical Storm Isaias making its way up the East Coast and new travel restrictions enacted in Massachusetts due to the pandemic, Captain Perry took the ship to the protected harbor in New Bedford instead and then made one more stop at Massachusetts Maritime Academy, on the Buzzards Bay side of the Cape Cod Canal. It has been a difficult path, but when the ship sailed the final leg home to Plymouth under blue skies and a light breeze, her reception from those watching from the shore could not have been more jubilant. During these turbulent times, the successful completion of