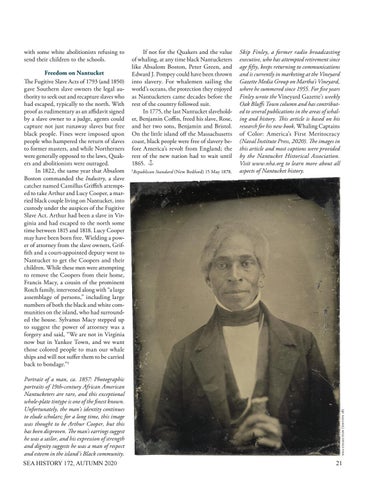 Freedom on Nantucket The Fugitive Slave Acts of 1793 (and 1850) gave Southern slave owners the legal authority to seek out and recapture slaves who had escaped, typically to the north. With proof as rudimentary as an affidavit signed by a slave owner to a judge, agents could capture not just runaway slaves but free black people. Fines were imposed upon people who hampered the return of slaves to former masters, and while Northerners were generally opposed to the laws, Quakers and abolitionists were outraged. In 1822, the same year that Absalom Boston commanded the Industry, a slave catcher named Camillus Griffith attempted to take Arthur and Lucy Cooper, a married black couple living on Nantucket, into custody under the auspices of the Fugitive Slave Act. Arthur had been a slave in Virginia and had escaped to the north some time between 1815 and 1818. Lucy Cooper may have been born free. Wielding a power of attorney from the slave owners, Griffith and a court-appointed deputy went to Nantucket to get the Coopers and their children. While these men were attempting to remove the Coopers from their home, Francis Macy, a cousin of the prominent Rotch family, intervened along with “a large assemblage of persons,” including large numbers of both the black and white communities on the island, who had surrounded the house. Sylvanus Macy stepped up to suggest the power of attorney was a forgery and said, “We are not in Virginia now but in Yankee Town, and we want those colored people to man our whale ships and will not suffer them to be carried back to bondage.”1 Portrait of a man, ca. 1857: Photographic portraits of 19th-century African American Nantucketers are rare, and this exceptional whole-plate tintype is one of the finest known. Unfortunately, the man’s identity continues to elude scholars; for a long time, this image was thought to be Arthur Cooper, but this has been disproven. The man’s earrings suggest he was a sailor, and his expression of strength and dignity suggests he was a man of respect and esteem in the island’s Black community.

If not for the Quakers and the value of whaling, at any time black Nantucketers like Absalom Boston, Peter Green, and Edward J. Pompey could have been thrown into slavery. For whalemen sailing the world’s oceans, the protection they enjoyed as Nantucketers came decades before the rest of the country followed suit. In 1775, the last Nantucket slaveholder, Benjamin Coffin, freed his slave, Rose, and her two sons, Benjamin and Bristol. On the little island off the Massachusetts coast, black people were free of slavery before America’s revolt from England; the rest of the new nation had to wait until 1865. 1Republican

Skip Finley, a former radio broadcasting executive, who has attempted retirement since age fifty, keeps returning to communications and is currently in marketing at the Vineyard Gazette Media Group on Martha’s Vineyard, where he summered since 1955. For five years Finley wrote the Vineyard Gazette’s weekly Oak Bluffs Town column and has contributed to several publications in the areas of whaling and history. This article is based on his research for his new book, Whaling Captains of Color: America’s First Meritocracy (Naval Institute Press, 2020). The images in this article and most captions were provided by the Nantucket Historical Association. Visit www.nha.org to learn more about all aspects of Nantucket history.

with some white abolitionists refusing to send their children to the schools.