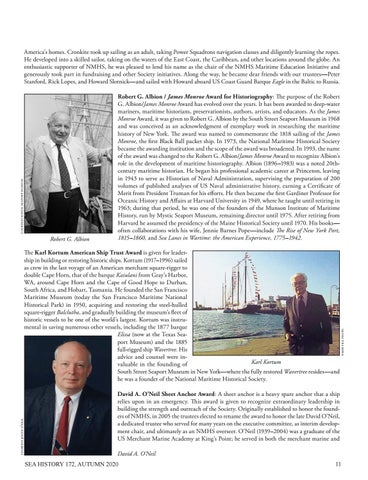 Robert G. Albion / James Monroe Award for Historiography: The purpose of the Robert G. Albion/James Monroe Award has evolved over the years. It has been awarded to deep-water mariners, maritime historians, preservationists, authors, artists, and educators. As the James Monroe Award, it was given to Robert G. Albion by the South Street Seaport Museum in 1968 and was conceived as an acknowledgment of exemplary work in researching the maritime history of New York. The award was named to commemorate the 1818 sailing of the James Monroe, the first Black Ball packet ship. In 1973, the National Maritime Historical Society became the awarding institution and the scope of the award was broadened. In 1993, the name of the award was changed to the Robert G. Albion/James Monroe Award to recognize Albion’s role in the development of maritime historiography. Albion (1896–1983) was a noted 20thcentury maritime historian. He began his professional academic career at Princeton, leaving in 1943 to serve as Historian of Naval Administration, supervising the preparation of 200 volumes of published analyses of US Naval administrative history, earning a Certificate of Merit from President Truman for his efforts. He then became the first Gardiner Professor for Oceanic History and Affairs at Harvard University in 1949, where he taught until retiring in 1963; during that period, he was one of the founders of the Munson Institute of Maritime History, run by Mystic Seaport Museum, remaining director until 1975. After retiring from Harvard he assumed the presidency of the Maine Historical Society until 1970. His books— often collaborations with his wife, Jennie Barnes Pope—include The Rise of New York Port, 1815–1860, and Sea Lanes in Wartime: the American Experience, 1775–1942.

The Karl Kortum American Ship Trust Award is given for leadership in building or restoring historic ships. Kortum (1917–1996) sailed as crew in the last voyage of an American merchant square-rigger to double Cape Horn, that of the barque Kaiulani from Gray’s Harbor, WA, around Cape Horn and the Cape of Good Hope to Durban, South Africa, and Hobart, Tasmania. He founded the San Francisco Maritime Museum (today the San Francisco Maritime National Historical Park) in 1950, acquiring and restoring the steel-hulled square-rigger Balclutha, and gradually building the museum’s fleet of historic vessels to be one of the world’s largest. Kortum was instrumental in saving numerous other vessels, including the 1877 barque Elissa (now at the Texas Seaport Museum) and the 1885 full-rigged ship Wavertree. His advice and counsel were inKarl Kortum valuable in the founding of South Street Seaport Museum in New York—where the fully restored Wavertree resides—and he was a founder of the National Maritime Historical Society.

America’s homes. Cronkite took up sailing as an adult, taking Power Squadrons navigation classes and diligently learning the ropes. He developed into a skilled sailor, taking on the waters of the East Coast, the Caribbean, and other locations around the globe. An enthusiastic supporter of NMHS, he was pleased to lend his name as the chair of the NMHS Maritime Education Initiative and generously took part in fundraising and other Society initiatives. Along the way, he became dear friends with our trustees—Peter Stanford, Rick Lopes, and Howard Slotnick—and sailed with Howard aboard US Coast Guard Barque Eagle in the Baltic to Russia.

David A. O’Neil Sheet Anchor Award: A sheet anchor is a heavy spare anchor that a ship relies upon in an emergency. This award is given to recognize extraordinary leadership in building the strength and outreach of the Society. Originally established to honor the founders of NMHS, in 2005 the trustees elected to rename the award to honor the late David O’Neil, a dedicated trustee who served for many years on the executive committee, as interim development chair, and ultimately as an NMHS overseer. O’Neil (1939–2004) was a graduate of the US Merchant Marine Academy at King’s Point; he served in both the merchant marine and David A. O’Neil SEA HISTORY 172, AUTUMN 2020 11