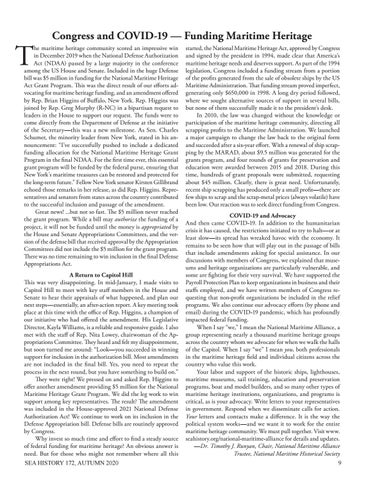 he maritime heritage community scored an impressive win in December 2019 when the National Defense Authorization Act (NDAA) passed by a large majority in the conference among the US House and Senate. Included in the huge Defense bill was $5 million in funding for the National Maritime Heritage Act Grant Program. This was the direct result of our efforts advocating for maritime heritage funding, and an amendment offered by Rep. Brian Higgins of Buffalo, New York. Rep. Higgins was joined by Rep. Greg Murphy (R-NC) in a bipartisan request to leaders in the House to support our request. The funds were to come directly from the Department of Defense at the initiative of the Secretary—this was a new milestone. As Sen. Charles Schumer, the minority leader from New York, stated in his announcement: “I’ve successfully pushed to include a dedicated funding allocation for the National Maritime Heritage Grant Program in the final NDAA. For the first time ever, this essential grant program will be funded by the federal purse, ensuring that New York’s maritime treasures can be restored and protected for the long-term future.” Fellow New York senator Kirsten Gillibrand echoed those remarks in her release, as did Rep. Higgins. Representatives and senators from states across the country contributed to the successful inclusion and passage of the amendment. Great news! ...but not so fast. The $5 million never reached the grant program. While a bill may authorize the funding of a project, it will not be funded until the money is appropriated by the House and Senate Appropriations Committees, and the version of the defense bill that received approval by the Appropriation Committees did not include the $5 million for the grant program. There was no time remaining to win inclusion in the final Defense Appropriations Act. A Return to Capitol Hill This was very disappointing. In mid-January, I made visits to Capitol Hill to meet with key staff members in the House and Senate to hear their appraisals of what happened, and plan our next steps—essentially, an after-action report. A key meeting took place at this time with the office of Rep. Higgins, a champion of our initiative who had offered the amendment. His Legislative Director, Kayla Williams, is a reliable and responsive guide. I also met with the staff of Rep. Nita Lowey, chairwoman of the Appropriations Committee. They heard and felt my disappointment, but soon turned me around: “Look—you succeeded in winning support for inclusion in the authorization bill. Most amendments are not included in the final bill. Yes, you need to repeat the process in the next round, but you have something to build on.” They were right! We pressed on and asked Rep. Higgins to offer another amendment providing $5 million for the National Maritime Heritage Grant Program. We did the leg work to win support among key representatives. The result? The amendment was included in the House-approved 2021 National Defense Authorization Act! We continue to work on its inclusion in the Defense Appropriation bill. Defense bills are routinely approved by Congress. Why invest so much time and effort to find a steady source of federal funding for maritime heritage? An obvious answer is need. But for those who might not remember where all this

started, the National Maritime Heritage Act, approved by Congress and signed by the president in 1994, made clear that America’s maritime heritage needs and deserves support. As part of the 1994 legislation, Congress included a funding stream from a portion of the profits generated from the sale of obsolete ships by the US Maritime Administration. That funding stream proved imperfect, generating only $650,000 in 1998. A long dry period followed, where we sought alternative sources of support in several bills, but none of them successfully made it to the president’s desk. In 2010, the law was changed without the knowledge or participation of the maritime heritage community, directing all scrapping profits to the Maritime Administration. We launched a major campaign to change the law back to the original form and succeeded after a six-year effort. With a renewal of ship scrapping by the MARAD, about $9.5 million was generated for the grants program, and four rounds of grants for preservation and education were awarded between 2015 and 2018. During this time, hundreds of grant proposals were submitted, requesting about $45 million. Clearly, there is great need. Unfortunately, recent ship scrapping has produced only a small profit—there are few ships to scrap and the scrap-metal prices (always volatile) have been low. Our reaction was to seek direct funding from Congress. COVID-19 and Advocacy And then came COVID-19. In addition to the humanitarian crisis it has caused, the restrictions initiated to try to halt—or at least slow—its spread has wreaked havoc with the economy. It remains to be seen how that will play out in the passage of bills that include amendments asking for special assistance. In our discussions with members of Congress, we explained that museums and heritage organizations are particularly vulnerable, and some are fighting for their very survival. We have supported the Payroll Protection Plan to keep organizations in business and their staffs employed, and we have written members of Congress requesting that non-profit organizations be included in the relief programs. We also continue our advocacy efforts (by phone and email) during the COVID-19 pandemic, which has profoundly impacted federal funding. When I say “we,” I mean the National Maritime Alliance, a group representing nearly a thousand maritime heritage groups across the country whom we advocate for when we walk the halls of the Capitol. When I say “we” I mean you, both professionals in the maritime heritage field and individual citizens across the country who value this work. Your labor and support of the historic ships, lighthouses, maritime museums, sail training, education and preservation programs, boat and model builders, and so many other types of maritime heritage institutions, organizations, and programs is critical, as is your advocacy. Write letters to your representatives in government. Respond when we disseminate calls for action. Your letters and contacts make a difference. It is the way the political system works—and we want it to work for the entire maritime heritage community. We must pull together. Visit www. seahistory.org/national-maritime-alliance for details and updates. —Dr. Timothy J. Runyan, Chair, National Maritime Alliance Trustee, National Maritime Historical Society