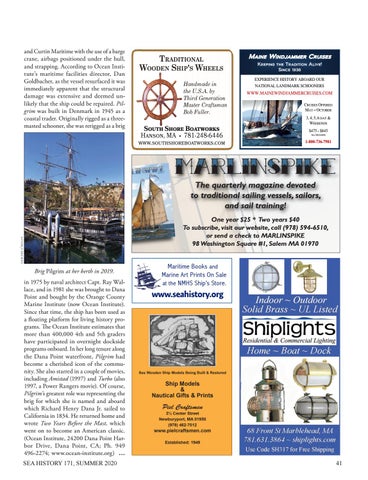 and Curtin Maritime with the use of a barge crane, airbags positioned under the hull, and strapping. According to Ocean Institute’s maritime facilities director, Dan Goldbacher, as the vessel resurfaced it was immediately apparent that the structural damage was extensive and deemed unlikely that the ship could be repaired. Pilgrim was built in Denmark in 1945 as a coastal trader. Originally rigged as a threemasted schooner, she was rerigged as a brig

Brig Pilgrim at her berth in 2019. in 1975 by naval architect Capt. Ray Wallace, and in 1981 she was brought to Dana Point and bought by the Orange County Marine Institute (now Ocean Institute). Since that time, the ship has been used as a floating platform for living history programs. The Ocean Institute estimates that more than 400,000 4th and 5th graders have participated in overnight dockside programs onboard. In her long tenure along the Dana Point waterfront, Pilgrim had become a cherished icon of the community. She also starred in a couple of movies, including Amistad (1997) and Turbo (also 1997, a Power Rangers movie). Of course, Pilgrim’s greatest role was representing the brig for which she is named and aboard which Richard Henry Dana Jr. sailed to California in 1834. He returned home and wrote Two Years Before the Mast, which went on to become an American classic. (Ocean Institute, 24200 Dana Point Harbor Drive, Dana Point, CA; Ph. 949 496-2274; www.ocean-institute.org) …

Maritime Books and Marine Art Prints On Sale at the NMHS Ship’s Store.