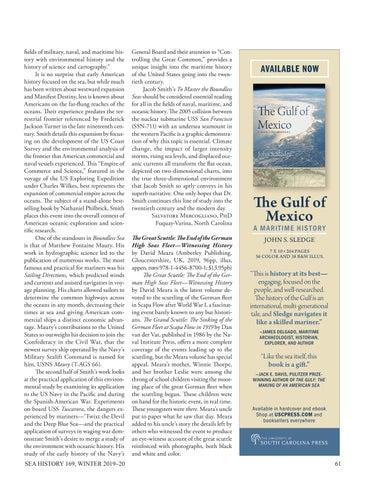 fields of military, naval, and maritime history with environmental history and the history of science and cartography.” It is no surprise that early American history focused on the sea, but while much has been written about westward expansion and Manifest Destiny, less is known about Americans on the far-flung reaches of the oceans. Their experience predates the terrestrial frontier referenced by Frederick Jackson Turner in the late nineteenth century. Smith details this expansion by focusing on the development of the US Coast Survey and the environmental analysis of the frontier that American commercial and naval vessels experienced. This “Empire of Commerce and Science,” featured in the voyage of the US Exploring Expedition under Charles Wilkes, best represents the expansion of commercial empire across the oceans. The subject of a stand-alone bestselling book by Nathaniel Philbrick, Smith places this event into the overall context of American oceanic exploration and scientific research. One of the standouts in Boundless Sea is that of Matthew Fontaine Maury. His work in hydrographic science led to the publication of numerous works. The most famous and practical for mariners was his Sailing Directions, which predicted winds and currents and assisted navigators in voyage planning. His charts allowed sailors to determine the common highways across the oceans in any month, decreasing their times at sea and giving American commercial ships a distinct economic advantage. Maury’s contributions to the United States so outweighs his decision to join the Confederacy in the Civil War, that the newest survey ship operated by the Navy’s Military Sealift Command is named for him, USNS Maury (T-AGS 66). The second half of Smith’s work looks at the practical application of this environmental study by examining its application to the US Navy in the Pacific and during the Spanish-American War. Experiments on board USS Tuscarora, the dangers experienced by mariners—‘Twixt the Devil and the Deep Blue Sea—and the practical application of surveys in waging war demonstrate Smith’s desire to merge a study of the environment with oceanic history. His study of the early history of the Navy’s

General Board and their attention to “Controlling the Great Common,” provides a unique insight into the maritime history of the United States going into the twentieth century. Jacob Smith’s To Master the Boundless Seas should be considered essential reading for all in the fields of naval, maritime, and oceanic history. The 2005 collision between the nuclear submarine USS San Francisco (SSN-711) with an undersea seamount in the western Pacific is a graphic demonstration of why this topic is essential. Climate change, the impact of larger intensity storms, rising sea levels, and displaced oceanic currents all transform the flat ocean, depicted on two-dimensional charts, into the true three-dimensional environment that Jacob Smith so aptly conveys in his superb narrative. One only hopes that Dr. Smith continues this line of study into the twentieth century and the modern day. Salvatore Mercogliano, PhD Fuquay-Varina, North Carolina The Great Scuttle: The End of the German High Seas Fleet—Witnessing History by David Meara (Amberley Publishing, Gloucestershire, UK, 2019, 96pp, illus, appen, isbn 978-1-4456-8700-1; $13.95pb) The Great Scuttle: The End of the German High Seas Fleet—Witnessing History by David Meara is the latest volume devoted to the scuttling of the German fleet in Scapa Flow after World War I, a fascinating event barely known to any but historians. The Grand Scuttle: The Sinking of the German Fleet at Scapa Flow in 1919 by Dan van der Vat, published in 1986 by the Naval Institute Press, offers a more complete coverage of the events leading up to the scuttling, but the Meara volume has special appeal. Meara’s mother, Winnie Thorpe, and her brother Leslie were among the throng of school children visiting the mooring place of the great German fleet when the scuttling began. These children were on hand for the historic event, in real time. These youngsters were there. Meara’s uncle put to paper what he saw that day. Meara added to his uncle’s story the details left by others who witnessed the event to produce an eye-witness account of the great scuttle reinforced with photographs, both black and white and color.

“This is history at its best— engaging, focused on the people, and well-researched. The history of the Gulf is an international, multi-generational tale, and Sledge navigates it like a skilled mariner.” —JAMES DELGADO, MARITIME ARCHAEOLOGIST, HISTORIAN, EXPLORER, AND AUTHOR

“Like the sea itself, this book is a gift.” —JACK E. DAVIS, PULITZER PRIZEWINNING AUTHOR OF THE GULF: THE MAKING OF AN AMERICAN SEA

Available in hardcover and ebook Shop at USCPRESS.COM and booksellers everywhere