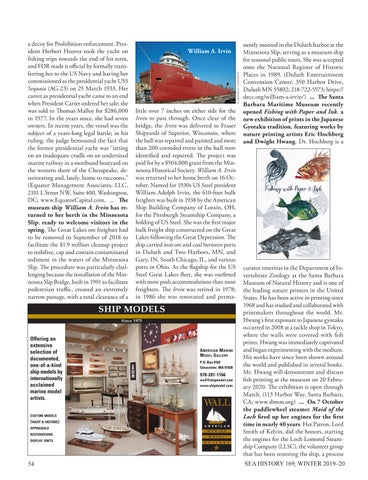 a decoy for Prohibition enforcement. President Herbert Hoover took the yacht on fishing trips towards the end of his term, and FDR made it official by formally transferring her to the US Navy and having her commissioned as the presidential yacht USS Sequoia (AG-23) on 25 March 1933. Her career as presidential yacht came to an end when President Carter ordered her sale; she was sold to Thomas Malloy for $286,000 in 1977. In the years since, she had seven owners. In recent years, the vessel was the subject of a years-long legal battle; in his ruling, the judge bemoaned the fact that the former presidential yacht was “sitting on an inadequate cradle on an undersized marine railway in a moribund boatyard on the western shore of the Chesapeake, deteriorating and, lately, home to raccoons.” (Equator Management Associates, LLC, 2101 L Street NW, Suite 400, Washington, DC; www.EquatorCapital.com. ... The museum ship William A. Irvin has returned to her berth in the Minnesota Slip, ready to welcome visitors in the spring. The Great Lakes ore freighter had to be removed in September of 2018 to facilitate the $1.9 million cleanup project to stabilize, cap and contain contaminated sediment in the waters of the Minnesota Slip. The procedure was particularly challenging because the installation of the Minnesota Slip Bridge, built in 1991 to facilitate pedestrian traffic, created an extremely narrow passage, with a total clearance of a

little over 7 inches on either side for the Irvin to pass through. Once clear of the bridge, the Irvin was delivered to Fraser Shipyards of Superior, Wisconsin, where the hull was repaired and painted and more than 200 corroded rivets in the hull were identified and repaired. The project was paid for by a $504,000 grant from the Minnesota Historical Society. William A. Irvin was returned to her home berth on 16 October. Named for 1930s US Steel president William Adolph Irvin, the 610-foot bulk freighter was built in 1938 by the American Ship Building Company of Lorain, OH, for the Pittsburgh Steamship Company, a holding of US Steel. She was the first major bulk freight ship constructed on the Great Lakes following the Great Depression. The ship carried iron ore and coal between ports in Duluth and Two Harbors, MN, and Gary, IN, South Chicago, IL, and various ports in Ohio. As the flagship for the US Steel Great Lakes fleet, she was outfitted with more posh accommodations than most Pleasant Stre freighters. The Irvin was retired in 1978; 20 in 1986 she was renovated and perma-

nently moored in the Duluth harbor at the Minnesota Slip, serving as a museum ship for seasonal public tours. She was accepted onto the National Register of Historic Places in 1989. (Duluth Entertainment Convention Center, 350 Harbor Drive, Duluth MN 55802; 218-722-5573; https:// decc.org/william-a-irvin/) ... The Santa Barbara Maritime Museum recently opened Fishing with Paper and Ink, a new exhibition of prints in the Japanese Gyotaku tradition, featuring works by nature printing artists Eric Hochberg and Dwight Hwang. Dr. Hochberg is a

curator emeritus in the Department of Invertebrate Zoology at the Santa Barbara Museum of Natural History and is one of the leading nature printers in the United States. He has been active in printing since 1968 and has studied and collaborated with printmakers throughout the world. Mr. Hwang’s first exposure to Japanese gyotaku occurred in 2008 at a tackle shop in Tokyo, where the walls were covered with fish prints. Hwang was immediately captivated and began experimenting with the medium. His works have since been shown around the world and published in several books. Mr. Hwang will demonstrate and discuss fish printing at the museum on 20 February 2020. The exhibition is open through March. (113 Harbor Way, Santa Barbara, CA; www.sbmm.org) ... On 7 October the paddlewheel steamer Maid of the Loch fired up her engines for the first time in nearly 40 years. Her Patron, Lord Smith of Kelvin, did the honors, starting the engines for the Loch Lomond Steamship Company (LLSC), the volunteer group that has been restoring the ship, a process SEA HISTORY 169, WINTER 2019–20