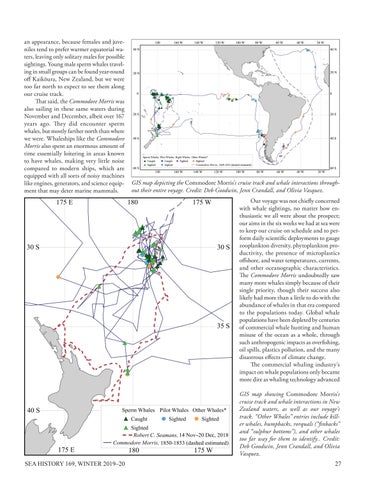 an appearance, because females and juveniles tend to prefer warmer equatorial waters, leaving only solitary males for possible sightings. Young male sperm whales traveling in small groups can be found year-round off Kaikōura, New Zealand, but we were too far north to expect to see them along our cruise track. That said, the Commodore Morris was also sailing in these same waters during November and December, albeit over 167 years ago. They did encounter sperm whales, but mostly farther north than where we were. Whaleships like the Commodore Morris also spent an enormous amount of time essentially loitering in areas known to have whales, making very little noise compared to modern ships, which are equipped with all sorts of noisy machines like engines, generators, and science equipment that may deter marine mammals.

GIS map depicting the Commodore Morris’s cruise track and whale interactions throughout their entire voyage. Credit: Deb Goodwin, Jenn Crandall, and Olivia Vasquez. Our voyage was not chiefly concerned with whale sightings, no matter how enthusiastic we all were about the prospect; our aims in the six weeks we had at sea were to keep our cruise on schedule and to perform daily scientific deployments to gauge zooplankton diversity, phytoplankton productivity, the presence of microplastics offshore, and water temperatures, currents, and other oceanographic characteristics. The Commodore Morris undoubtedly saw many more whales simply because of their single priority, though their success also likely had more than a little to do with the abundance of whales in that era compared to the populations today. Global whale populations have been depleted by centuries of commercial whale hunting and human misuse of the ocean as a whole, through such anthropogenic impacts as overfishing, oil spills, plastics pollution, and the many disastrous effects of climate change. The commercial whaling industry’s impact on whale populations only became more dire as whaling technology advanced GIS map showing Commodore Morris’s cruise track and whale interactions in New Zealand waters, as well as our voyage’s track. “Other Whales” entries include killer whales, humpbacks, rorquals (“finbacks” and “sulphur bottoms”), and other whales too far way for them to identify.. Credit: Deb Goodwin, Jenn Crandall, and Olivia Vasquez.