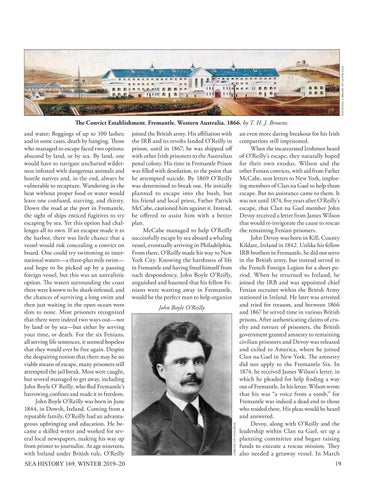 The Convict Establishment, Fremantle, Western Australia, 1866, by T. H. J. Browne. joined the British army. His affiliation with the IRB and its revolts landed O’Reilly in prison, until in 1867; he was shipped off with other Irish prisoners to the Australian penal colony. His time in Fremantle Prison was filled with desolation, to the point that he attempted suicide. By 1869 O’Reilly was determined to break out. He initially planned to escape into the bush, but his friend and local priest, Father Patrick McCabe, cautioned him against it. Instead, he offered to assist him with a better plan. McCabe managed to help O’Reilly successfully escape by sea aboard a whaling vessel, eventually arriving in Philadelphia. From there, O’Reilly made his way to New York City. Knowing the harshness of life in Fremantle and having freed himself from such despondency, John Boyle O’Reilly, anguished and haunted that his fellow Fenians were wasting away in Fremantle, would be the perfect man to help organize John Boyle O’Reilly

and water; floggings of up to 100 lashes; and in some cases, death by hanging. Those who managed to escape faced two options: abscond by land, or by sea. By land, one would have to navigate uncharted wilderness infested with dangerous animals and hostile natives and, in the end, always be vulnerable to recapture. Wandering in the heat without proper food or water would leave one confused, starving, and thirsty. Down the road at the port in Fremantle, the sight of ships enticed fugitives to try escaping by sea. Yet this option had challenges all its own. If an escapee made it to the harbor, there was little chance that a vessel would risk concealing a convict on board. One could try swimming to international waters—a three-plus mile swim— and hope to be picked up by a passing foreign vessel, but this was an unrealistic option. The waters surrounding the coast there were known to be shark-infested, and the chances of surviving a long swim and then just waiting in the open ocean were slim to none. Most prisoners recognized that there were indeed two ways out—not by land or by sea—but either by serving your time, or death. For the six Fenians, all serving life sentences, it seemed hopeless that they would ever be free again. Despite the despairing notion that there may be no viable means of escape, many prisoners still attempted the jail break. Most were caught, but several managed to get away, including John Boyle O’ Reilly, who fled Fremantle’s harrowing confines and made it to freedom. John Boyle O’Reilly was born in June 1844, in Dowth, Ireland. Coming from a reputable family, O’Reilly had an advantageous upbringing and education. He became a skilled writer and worked for several local newspapers, making his way up from printer to journalist. At age nineteen, with Ireland under British rule, O’Reilly

an even more daring breakout for his Irish compatriots still imprisoned. When the incarcerated Irishmen heard of O’Reilly’s escape, they naturally hoped for their own exodus. Wilson and the other Fenian convicts, with aid from Father McCabe, sent letters to New York, imploring members of Clan na Gael to help them escape. But no assistance came to them. It was not until 1874, five years after O’Reilly’s escape, that Clan na Gael member John Devoy received a letter from James Wilson that would re-invigorate the cause to rescue the remaining Fenian prisoners. John Devoy was born in Kill, County Kildare, Ireland in 1842. Unlike his fellow IRB brothers in Fremantle, he did not serve in the British army, but instead served in the French Foreign Legion for a short period. When he returned to Ireland, he joined the IRB and was appointed chief Fenian recruiter within the British Army stationed in Ireland. He later was arrested and tried for treason, and between 1866 and 1867 he served time in various British prisons. After authenticating claims of cruelty and torture of prisoners, the British government granted amnesty to remaining civilian prisoners and Devoy was released and exiled to America, where he joined Clan na Gael in New York. The amnesty did not apply to the Fremantle Six. In 1874, he received James Wilson’s letter, in which he pleaded for help finding a way out of Fremantle. In his letter, Wilson wrote that his was “a voice from a tomb,” for Fremantle was indeed a dead end to those who resided there. His pleas would be heard and answered. Devoy, along with O’Reilly and the leadership within Clan na Gael, set up a planning committee and began raising funds to execute a rescue mission. They also needed a getaway vessel. In March