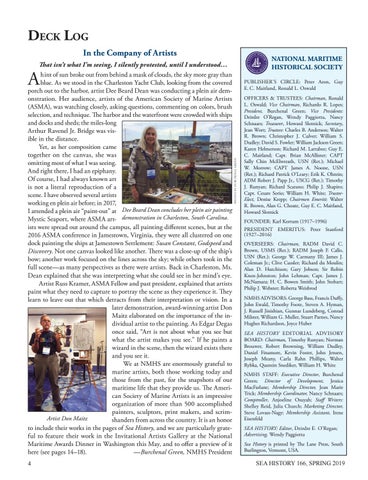 Deck Log In the Company of Artists That isn’t what I’m seeing, I silently protested, until I understood… hint of sun broke out from behind a mask of clouds, the sky more gray than blue. As we stood in the Charleston Yacht Club, looking from the covered porch out to the harbor, artist Dee Beard Dean was conducting a plein air demonstration. Her audience, artists of the American Society of Marine Artists (ASMA), was watching closely, asking questions, commenting on colors, brush selection, and technique. The harbor and the waterfront were crowded with ships and docks and sheds; the miles-long Arthur Ravenel Jr. Bridge was visible in the distance. Yet, as her composition came together on the canvas, she was omitting most of what I was seeing. And right there, I had an epiphany. Of course, I had always known art is not a literal reproduction of a scene. I have observed several artists working en plein air before; in 2017, I attended a plein air “paint-out” at Dee Beard Dean concludes her plein air painting Mystic Seaport, where ASMA art- demonstration in Charleston, South Carolina. ists were spread out around the campus, all painting different scenes, but at the 2016 ASMA conference in Jamestown, Virginia, they were all clustered on one dock painting the ships at Jamestown Settlement: Susan Constant, Godspeed and Discovery. Not one canvas looked like another. There was a close-up of the ship’s bow; another work focused on the lines across the sky; while others took in the full scene—as many perspectives as there were artists. Back in Charleston, Ms. Dean explained that she was interpreting what she could see in her mind’s eye. Artist Russ Kramer, ASMA Fellow and past president, explained that artists paint what they need to capture to portray the scene as they experience it. They learn to leave out that which detracts from their interpretation or vision. In a later demonstration, award-winning artist Don Maitz elaborated on the importance of the individual artist to the painting. As Edgar Degas once said, “Art is not about what you see but what the artist makes you see.” If he paints a wizard in the scene, then the wizard exists there and you see it. We at NMHS are enormously grateful to marine artists, both those working today and those from the past, for the snapshots of our maritime life that they provide us. The American Society of Marine Artists is an impressive organization of more than 500 accomplished painters, sculptors, print makers, and scrimArtist Don Maitz shanders from across the country. It is an honor to include their works in the pages of Sea History, and we are particularly grateful to feature their work in the Invitational Artists Gallery at the National Maritime Awards Dinner in Washington this May, and to offer a preview of it here (see pages 14–18). —Burchenal Green, NMHS President