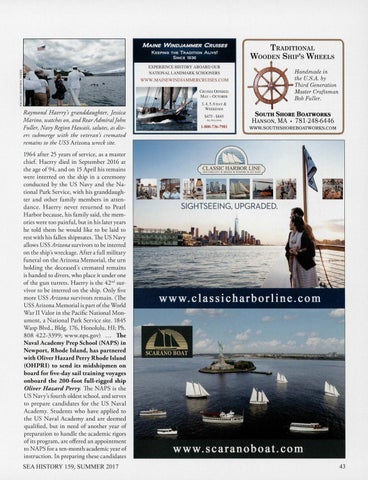 1964 after 25 years of service, as a master chief. H aerry died in September 2016 at the age of 94, and on 15 April his remains were interred on the ship in a ceremony conducted by the US Navy and the National Park Service, with his granddaughter and other family members in attendance. Haerry never returned to Pearl Harbor because, his family said, the memories were too painful, but in his later years he told them he would like to be laid to rest with his fallen shipmates. The US Navy allows USS Arizona survivors to be interred on the ship&#39;s wreckage. After a full military funeral on the Arizona Memorial, the urn holding the deceased&#39;s cremated remains is handed to divers, who place it under one of the gun turrets . Haerry is the 42°d survivor to be interred on the ship. O nly five more USS Arizona survivors remain. (The USS Arizona Memorial is part of the World War II Valor in the Pacific National Monument, a National Park Service site. 1845 Wasp Blvd., Bldg. 176, Honolulu , HI; Ph. 808 422-3399; www.nps .gov) . . . The Naval Academy Prep School (NAPS) in Newport, Rhode Island, has partnered with Oliver Hazard Perry Rhode Island (OHPRI) to send its midshipmen on board for five-day sail training voyages onboard the 200-foot full-rigged ship Oliver Hazard Perry. The NAPS is the US Navy&#39;s fourth oldest school, and serves to prepare candidates for the US Naval Academy. Students who have applied to the US Naval Academy and are deemed qualified, but in need of another year of preparation to handle the academic rigors of its program, are offered an appointment to NAPS for a ten-month academic year of instruction. In preparing these candidates SEA HISTORY 159, SUMMER2017