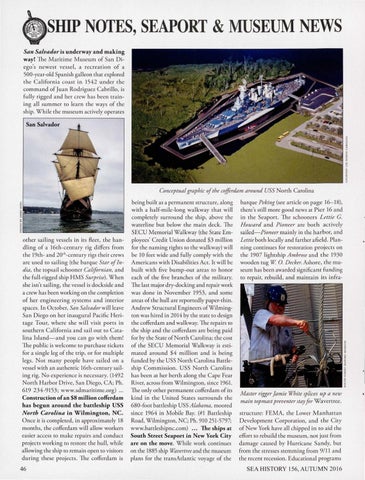 .SHIP NOTES, SEAPORT &amp; MUSEUM NEWS San Salvado r is under way and m ak ing way! The M aricime Museum of Sa n Diego&#39;s newes t vessel, a recreation of a 500-year-old Spanish galleon chac explored che California coasc in 1542 under the command of Ju an Rodriguez Cabri llo, is fully rigged and her crew has been craining all summer to learn the ways of the sh ip. While the museu m ac tively operates San Salvador

Conceptual graphic of the cofferdam around USS No rth Carolina

other saili ng vessels in its fleet, the handling of a 16 th-century rig differs from the 19th- and 20&#39;h-century rigs their crews are used to sailing (the barque Star ofI ndia, the to psa il schooner Californian, and the full-rigged ship HMS Surprise). W hen she isn&#39;t sailing, the vessel is dockside and a crew has been working on the complecion of her engineering system s and interior spaces. In O ctober, San Salvador will leave San Diego on her inaugural Paci fi c H eritage Tour, where she wi ll visit ports in southern California and sail out to Catalina Island-and you can go with them! The publi c is welcome to purchase tickets for a single leg of the trip, or fo r multipl e legs . N ot m any people have sailed on a vessel with an authentic 16th-century sa iling rig. No experience is necessary. (1492 North Harbor Drive, Sa n Diego, CA; Ph. 619 234-91 53; www.sdmaritime.org) ... Construction of an $8 million cofferdam has begun around the battleship USS No rth Carolina in W ilmin gton, NC. Once it is completed, in approximately 18 months, the cofferdam will allow wo rke rs easier access to make repairs and conduct projects wo rking to restore the h ull, while allowing the ship to remain open to visitors d uring these projects. The cofferdam is

being built as a permanent structure, along with a half-m ile-long walkway that will completely surro und the ship, above the waterline but below the main deck. The SECU M emorial Walkway (the State Employees&#39; C redit Union donated $3 million fo r the naming rights to the walkway) will be 10 fee t wide and fully comply with the Americans with Disabilities Act. It will be built with five bump-out areas to honor each of the five branches of the military. The last major dry-docking and repair work was done in November 1953, and some areas of the hull are reportedly paper-thin. Andrew Structural Engineers of W ilmington was hi red in 2014 by the state to design the cofferdam and walkway. The repairs to the ship and the cofferdam are being paid fo r by the State ofNorth Carolina; the cost of the SECU Memorial Walkway is estim ated around $4 m illion and is being funded by che USS N orth Carolina Bactleship C ommission. USS North Carolina has been at her berth along the Cape Fear River, across from Wilmington, since 1961. The only other permanent cofferdam of its kind in the United States surro unds the 680-foot battleship USS Alabama, moored since 1964 in Mobile Bay. (#1 Battleship Road, W ilmington, NC; Ph. 910 251-5797; www. batdeshipnc.com) ... The ships at South Street Seaport in New York City are on the move. W hile work continues on the 1885 ship Wavertree and the museum plans for the transAd antic voyage of the

barque Peking (see article on page 16-18), there&#39;s still more good news at Pier 16 and in the Seaport. The schooners L ettie G. Ho ward and Pioneer are both actively sailed- Pioneer mainly in the h a rbor, and Lettie both locally and fa rther afield . Planning continues fo r restoration projects on the 1907 lightship Ambrose and the 1930 wooden rug W 0. D ecker. Ashore, the museum has been awarded significant fundi ng to repair, rebuild, and maintain its infra-

structure: FEMA, the Lower M a nhattan D evelopment Corporation, and the City of New York have all chipped in co aid the effort to rebuild the museum, not just from dam age caused by Hurricane Sandy, but from the stresses stemming from 9/ 11 and the recent recession . Educational programs