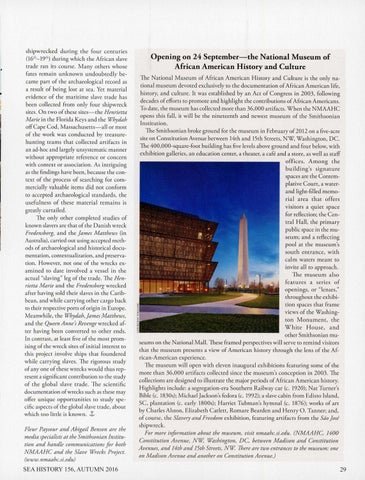 shipwrecked during the four centuries (16'h-19'h) during which the African slave trade ran its course. Many others whose fates remain unknown undoubtedly became part of the archaeological record as a result of being lost at sea. Yet material evidence of the maritime slave trade has been collected from only four shipwreck sites. On two of these sites-the Henrietta Marie in the Florida Keys and the Whydah off Cape Cod, Massachusetts-all or most of the work was conducted by treasurehunting teams that collected artifacts in an ad-hoc and largely unsystematic manner without appropriate reference or concern with context or association. As intriguing as the findings have been, because the context of the process of searching for commercially valuable items did not conform to accepted archaeological standards, the usefulness of these material remains is greatly curtailed. The only other completed studies of known slavers are that of the Danish wreck Fredensborg, and the fames Matthews (in Australia), carried out using accepted methods of archaeological and historical documentation, contextualization, and preservation. However, not one of the wrecks examined to date involved a vessel in the actual "slaving" leg of the trade. The Henrietta Marie and the Fredensborg wrecked after having sold their slaves in the Caribbean, and while carrying other cargo back to their respective ports of origin in Europe. Meanwhile, the Whydah,james Matthews, and the Queen Anne's Revenge wrecked after having been converted to other ends. In contrast, at least five of the most promising of the wreck sites of initial interest to this project involve ships that foundered while carrying slaves. The rigorous study of any one of these wrecks would thus represent a significant contribution to the study of the global slave trade. The scientific documentation of wrecks such as these may offer unique opportunities to study specific aspects of the global slave trade, about which too little is known . .:t

Fleur Paysour and Abigail Benson are the media specialists at the Smithsonian Institution and handle communications for both NMAAHC and the Slave Wrecks Project. (www.nmaahc.si. edu)

Opening on 24 September-the National Museum of African American History and Culture The National Museum of African American History and Culture is the only national museum devoted exclusively to the documentation of African American life, history, and culture. It was established by an Act of Congress in 2003, foll~wing decades of efforts to promote and highlight the contributions of African Amencans. To date, the museum has collected more than 36,000 artifacts. When the NMAAHC opens this fall, it will be the nineteenth and newest museum of the Smithsonian Institution. The Smithsonian broke ground for the museum in February of2012 on a five-acre site on Constitution Avenue between 14th and 15th Streets, NW, Washington, DC. The 400,000-square-foot building has five levels above ground and four below, with exhibition galleries, an education center, a theater, a cafe and a store, as well as staff offices. Among the building's signature spaces are the Contemplative Court, a waterand light-filled memorial area that offers visitors a quiet space for reflection; the Central Hall, the primary public space in the museum; and a reflecting pool at the museum's south entrance, with calm waters meant to invite all to approach. The museum also features a series of openings, or "lenses," throughout the exhibition spaces that frame views of the Washington Monument, the White House, and other Smithsonian museums on the National Mall. These framed perspectives will serve to remind visitors that the museum presents a view of American history through the lens of the African-American experience. The museum will open with eleven inaugural exhibitions feat uring some of the more than 36,000 artifacts collected since the museum's conception in 2003. The collections are designed to illustrate the major periods of African American histor~. Highlights include: a segregation-era Southern Railway car(~. 1920); N~t Turners Bible (c. 1830s); Michael Jackson's fedora (c. 1992); a slave cabin from Edisto Island, SC, plantation (c. early 1800s); Harriet Tubman's hymnal (c. 1876); works of art by Charles Alston, Elizabeth Catlett, Romare Bearden and ~enry 0. Tanner: and,, of course, the Slavery and Freedom exhibition, featuring am facts from the Sao Jose shipwreck. For more information about the museum, visit nmaahc.si.edu. (NMAA HC, 1400 Constitution Avenue, NW, Washington, DC, between Madison and Constztutzon Avenues, and 14th and 15th Streets, NW lhere are two entrances to the museum: one on Madison Avenue and another on Constitution Avenue.) 29