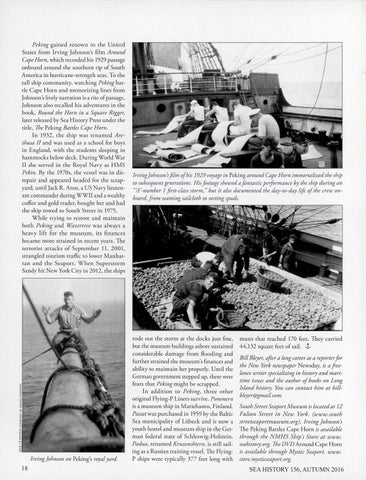 Peking gained renown in the United States from Irving Johnson&#39;s film Around Cape Horn, which recorded his 1929 passage onboard around the southern tip of South America in hurricane-strength seas. To the tall ship community, watching Peking battle Cape Horn and memorizing lines from Johnson&#39;s lively narration is a rite of passage. Johnson also recalled his adventures in the book, Round the Horn in a Square Rigger, later released by Sea History Press under the tide, The Peking Battles Cape Horn. In 1932, the ship was renamed Arethusa II and was used as a school for boys in England, with the students sleeping in hammocks below deck. During World War II she served in the Royal Navy as HMS Pekin. By the 1970s, the vessel was in disrepair and appeared headed for the scrapyard, until Jack R. Aron, a US Navy lieutenant commander during WWII and a wealthy coffee and gold trader, bought her and had the ship towed to South Street in 1975 . While trying to restore and maintain both Peking and Wavertree was always a heavy lift for the museum, its finances became more strained in recent yea rs. The terrorist attacks of September 11, 2001, strangled tourism traffic to lower Manhattan and the Seaport. W hen Superstorm Sandy hit New York C ity in 2012 , the ships

Irving Johnson&#39;sfilm ofhis 1929 voyage in Peking around Cape Horn immortalized the ship to subsequent generations. Hisfoo tage showed a fan tastic performance by the ship during an &quot;A &#39;-number 1 first-class storm,&quot; but it also documented the day-to-day life of the crew onboard, f rom seaming sailcloth to sorting sp uds.

rode out the storm at the docks just fine, but the museum buildings ashore sustained considerable damage from flooding and further strained the museum&#39;s finances and ability to maintain her properly. Until the German government stepped up, there were fears that Peking might be scrapped. In addition to Peking, three other original Flying-P Liners survive. Pommern is a museum ship in Mariehamn, Finland. Passatwas purchased in 1959 by the Baltic Sea municipality of Lubeck and is now a yo uth hostel and museum ship in the German federal state of Schleswig-Holstein. Padua, renamed Kruzenshtern, is still sailing as a Russian training vessel. The Flyingp ships were typically 377 feet long with

Bill Bleyer, after a long career as a reporter for the New York newspaper Newsday, is a freelance writer specializing in history and maritime issues and the author of books on Long Island history. You can contact him at billbleyer@gmail.com. South Street Seaport Museum is located at 12 Fulton Street in New York. (www.south streetseaportmuseum.org). Irving Johnson&#39;s The Peking Battles Cape Horn is available through the NMHS Ship&#39;s Store at www. seahistory. org. The DVD Around Cape Horn is available through Mystic Seaport. www. store. mysticseaport.org. SEA HISTORY 156, AUTUMN 2016