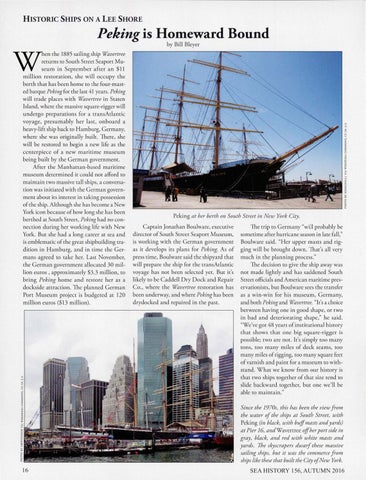 Peking is Homeward Bound by Bill Bleyer hen the 1885 sailing ship Wavertree returns to South Street Seaport Museum in September after an $ 11 million restoration, she will occupy the berth that has been home to the fo ur-mas ted barque Peking for the last 41 years. Peking will trade places with Wavertree in Staten Island, where the massive square-rigger will undergo preparations fo r a tra nsAd antic voyage, pres umably her las t, onboard a heavy-li ft ship back to H amburg, Germany, where she was originally built. There, she will be restored to begin a new li fe as the centerpiece of a new m aritime museum being built by the G erman government. After the Manhattan-based maritime museum determined it could not afford to maintain two massive tall ships, a conversation was initiated with the German government about its interest in raking possession of the ship. Although she has become a New York icon because of how long she has been berthed at South Street, Peking had no connection during her working life with New York. But she h ad a long career at sea and is emblematic of the great sh ipbuilding tradition in H amburg, and in time the Germans agreed to rake her. Last November, the German government allocated 30 million eu ros , approximately $3.3 million, to bring Peking home and resrore her as a dockside attraction. The planned Germ an Port M useum project is budgeted at 120 million euros ($13 million).

Peking at her berth on South Street in New York City. Captain Jonathan Boulwa re, executive di rector of South Street Seaport Museum, is working with the German government as it develops its plans fo r Peking. As of press time, Boulwa re said the shipyard that will prepare the ship for the transAd antic voyage h as not been selected ye t. But it's likely to be Caddell D ry D ock and Repair C o. , where the Wavertree restoration h as been underway, and where Peking has been drydocked and repaired in the pas t.

The trip to G ermany "will probably be sometime after hurricane season in late fall," Boulware said. "H er upper masts and rigging will be brought down. That's all very much in the planning process ." The decis ion to give the ship away was nor m ade lightly and has saddened South Street officials and American maritime preservationists, bur Boulwa re sees the transfer as a win-win for his museum, Germany, and both Peking and Wavertree. "Ir's a choice between having one in good shape, or two in bad and deteriorating shape," he said. "We've got 48 years of institutional history that shows that one big square-rigger is poss ible; two are not. Ir's simply too many tons, too many miles of deck seams, too many miles of rigging, too many square feet of varnish and paint for a museum to withstand. What we know from our history is that two ships together of that size tend to slide backwa rd together, but one we' ll be able to maintain." Since the 1970s, this has been the view from the water of the ships at South Street, with Peking (in black, with buffmasts and yards) at Pier 16, andWaverrree offher port side in gray, black, and red with white masts and yards. The skyscrapers dwarf these massive sailing ships, but it was the commerce from ships Like these that built the City of New York.