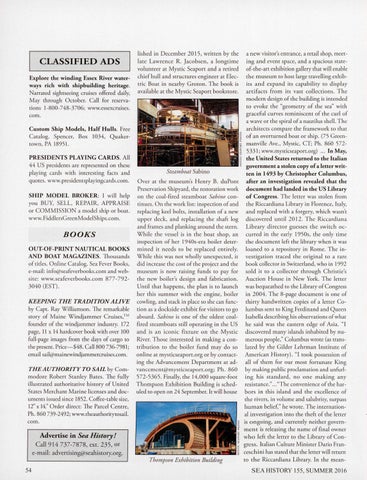 lished in December 2015 , written by the late Lawrence R. Jacobsen, a longtime volunteer at Mystic Seaport and a retired chief hull and structures engineer at Electric Boat in nearby Groton. The book is available at the Mystic Seaport bookstore.

KEEPING THE TRADITION ALIVE by Capt. Ray Williamson. The remarkable story of Maine Windjammer Cruises,â&amp;#x201E;˘ founder of the windjammer industry. 172 page, 11x14 hardcover book with over 100 full-page images from the days of cargo to the present. Price-$48. Call 800 736-7981; email sail@mainewindjammercruises.com.

Steamboat Sabino Over at the museum&#39;s Henry B. duPont Preservation Shipyard, the restoration work on the coal-fired steamboat Sabino continues . On the work list: inspection of and replacing keel bolts, installation of a new upper deck, and replacing the shaft log and frames and planking around the stem. While the vessel is in the boat shop, an inspection of her l 940s-era boiler determined it needs to be replaced entirely. While this was not wholly unexpected, it did increase the cost of the project and the museum is now raising funds to pay for the new boiler&#39;s design and fabrication. Until that happens, the plan is to launch her this summer with the engine, boiler cowling, and stack in place so she can function as a dockside exhibit for visitors ro go aboard. Sabino is one of the oldest coalfired steamboats still operating in the US and is an iconic fixrure on the Mystic River. Those interested in making a contribution to the boiler fund may do so online at mysticseaport.org or by contacting the Advancement Department at advancement@mysticseaport.org; Ph. 860 572-5365. Finally, the 14,000 sq uare-foot Thompson Exhibition Building is scheduled to open on 24 September. It will house

a new visitor&#39;s entrance, a retail shop, meeting and event space, and a spacious stateof-the-art exhibition gallery that will enable the museum to host large travelling exhibits and expand its capability to display artifacts from its vast collections. The modem design of the building is intended to evoke the &quot;geometry of the sea&quot; with graceful curves reminiscent of the curl of a wave or the spiral of a nautilus shell. The architects compare the framework to that of an overturned boat or ship. (75 Greenmanville Ave., Mystic, CT; Ph. 860 5725331; www.mysticseaport.org) ... In May, the United States returned to the Italian government a stolen copy of a letter written in 1493 by Christopher Columbus, after an investigation revealed that the document had landed in the US Library of Congress. The letter was stolen from the Riccardiana Library in Florence, Italy, and replaced with a forgery, which wasn&#39;t discovered until 2012. The Riccardiana Library director guesses the switch occurred in the early 1950s, the only time the document left the library when it was loaned to a reposiro ry in Rome. The investigation traced the original to a rare book collector in Switzerland, who in 1992 sold it to a collector through Christie&#39;s Auction House in New York. The letter was bequeathed to the Library of Congress in 2004. The 8-page document is one of thirty handwritten copies of a letter Columbus sent to King Ferdinand and Queen Isabella describing his observations of what he said was rhe eastern edge of Asia. &quot;I discovered many islands inhabited by numerous people,&quot; Columbus wrote (as translated by rhe Gilder Lehrman Institute of American History). &quot;I took possession of all of them for our most fort unate King by making public proclamation and unfurling his standard, no one making any resistance.&quot; .. .&quot;The convenience of the harbors in this island and the excellence of rhe rivers, in volume and salubrity, surpass human belief,&quot; he wrote. The international investigation into rhe theft of the letter is ongoing, and currently neither government is releasing rhe name of final owner who left the letter to the Library of Congress. Italian Culture Minister Dario Franceschini has stared that the letter will return to the Riccardiana Library. In rhe mean-