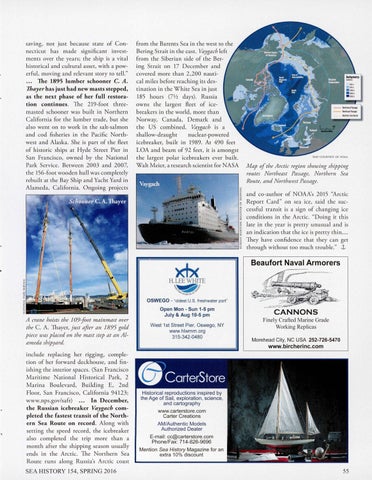 saving, not just because state of Connecticut has made significant investments over the years; the sh ip is a vital historical and cultural asset, with a powerful, moving and relevant story to tell." . . . The 1895 lumber schooner C. A. Thayer has just had new masts stepped, as the next phase of her full restoration continues. The 219-foot threemasted schooner was built in Northern California for the lumber trade, but she also went on to work in the salt-salmon and cod fisheries in the Pacific Northwest and Alaska. She is part of the fleet of historic ships at Hyde Street Pier in San Francisco, owned by the National Park Service. Between 2003 and 2007, the 156-foot wooden hull was completely rebuilt at the Bay Ship and Yacht Yard in Alameda, California. Ongoing projects

from the Barents Sea in the west to the Bering Strait in the east. Vaygach left from the Siberian side of the Bering Strait on 17 December and covered more than 2,200 nautical miles before reaching its destination in the White Sea in just 185 hours (7Y2 days). Russia owns the largest fleet of icebreakers in the world, more than Norway, Canada, Demark and the US combined. Vaygach is a shallow-draught nuclear-powered icebreaker, built in 1989. At 490 feet LOA and beam of 92 feet, it is amongst the largest polar icebreakers ever built. Walt Meier, a research scientist for NASA

Map of the Arctic region showing shipping routes Northeast Passage, Northern Sea Route, and Northwest Passage. and co-author of NOAA's 2015 ''Arctic Report Card " on sea ice, said the successful transit is a sign of changing ice conditions in the Arctic. "Doing it this late in the year is pretty unusual and is an indication that the ice is pretty thin .. .. They have confidence that they can get through without too much trouble." j:,

A crane hoists the 109-foot mainmast over the C. A. Thayer, just after an 1895 gold piece was placed on the mast step at an Alameda shipyard. include replacing her rigging, completion of her forward deckhouse, and finishing the interior spaces. (San Francisco Maritime National Historical Park, 2 Marina Boulevard, Building E, 2nd Floor, San Francisco, California 94123; www.nps.gov/safr) In December, the Russian icebreaker Vaygach completed the fastest transit of the Northern Sea Route on record. Alon g w ith setting the speed record, the icebreaker also completed the trip more than a month after the shipping season usually ends in the Arctic. The Northern Sea Route runs along Russia's Arctic coast