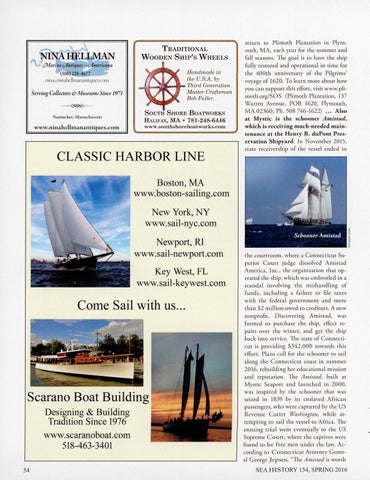 return to Plimoth Plantation in Plymouth, MA, each year for the summer and fall seasons. The goal is to have the ship fully restored and operational in time for the 400th anniversary of the Pilgrims&#39; voyage of 1620. To learn more about how you can support this effort, visit www.plimoth.org/SOS. (Plimoth Plantation, 137 Warren Avenue, POB 1620, Plymouth, MA 02360; Ph. 508 746-1622) ... Also at M ystic is the schooner Amistad, w hich is receiving much-needed m a intenance at the H enry B. duPont P reser vation Shipyard . In November 2015 , state receivership of the vessel ended in

the courtroom, where a Connecticut Superior Court judge dissolved Amistad America, Inc., the organization that operated the ship, wh ich was embroiled in a scandal involving the mishandling of funds, including a failure to file taxes with the federal government and more than $2 million owed to creditors. A new nonprofit, Discovering Amistad, was formed to purchase the ship, effect repairs over the winter, and get the sh ip back into service. The state of Connecticut is providing $342,000 towards this effort. Plans call for the schooner to sail along the Connecticut coast in summer 2016, rebuilding her educational mission and reputation. The Amistad, built at Mystic Seaport and launched in 2000, was inspired by the schoo ner that was seized in 1839 by its enslaved African passengers, who were captured by the US Revenue Cutter Washington, wh ile attempting to sail the vessel to Africa. The ensuing trial went eventually to the US Supreme Court, where the captives were found to b,e free men under the law. According to Connecticut Attorney General George Jepsen, &quot;The Amistad is worth