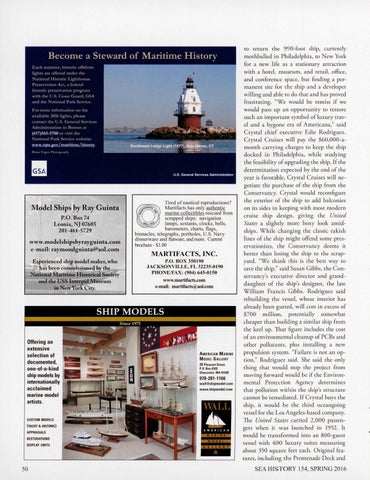 to rerurn che 99 0-fooc ship, currendy mochballed in Philadelphia, to New York for a new life as a sracionary anrac tion with a hotel, museum, and retail, offi ce, and conference space, but finding a permanem sire fo r the ship and a developer wi ll ing and able to do that and has proved frustrating. "W e would be remiss if we would pass up an opportunity to res tore such an important symbol of luxury travel and a bygone era of Americana," said Cryscal chief execucive Edie Rodriguez. Crys tal C ruises will pay che $60,000 -amomh carrying charges to keep the ship docked in Ph iladelphia, while srudying che feasibility of upgrading the ship. If the determination expected by the end of che year is favorable, Cryscal Cruises will negotiate the purchase of che ship from the Conserva ncy. C rysral would reconfigure the exterior of the ship to add balconies on its sides in keeping with most modern cruise ship d esign, giving the United States a slighdy more boxy look amidships. While changing the classic rakish lines of the ship mighc offend some preservacioniscs, the Conservancy deems it better than losing the ship to che scrapyard. "We think this is the best way to save the ship," said Susan G ibbs, the Conserva ncy's executive director and granddaughter of che ship's designer, the late William Francis Gibbs. Rodriguez said rebuilding the vessel, whose interior has already been guned , will cost in excess of $700 million, potentially somewhat cheaper than building a similar ship from che keel up. That figure includes che cosc of an environmental cleanup of PC Bs and other pollutants, plus install ing a new propulsion system. "Failure is not an option," Rodrig uez said. She said the only thing that would stop the project from moving forward would be if the Environmental Proceccion Agency determines that pollution within the ship's structure cannot be remediated. If C rys ral buys che ship, it would be che third oceangoing vessel for the Los Angeles-based company. The United States carried 2,000 passengers when it was launched in 1952. It would be transformed into an 800 -guest vessel wich 400 luxury suices measuring about 350 squa re feet each. Original features, including rhe Promenade D eck and