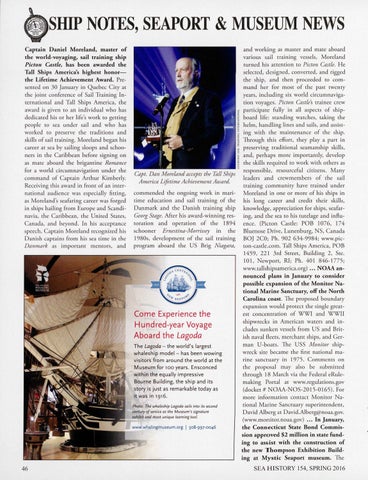 @>sHIP NOTES, SEAPORT & MUSEUM NEWS Captain Daniel Moreland, master of the world-voyaging, sail training ship Picton Castle, has been awarded the Tall Ships America's highest honorthe Lifetime Achievement Award. Presented on 30 January in Quebec City at the joint conference of Sail Training International and Tall Ships America, the award is given to an individual who has dedicated his or her life's work to getting people to sea under sail and who has worked to preserve the traditions and skills of sail training. Moreland began his career at sea by sailing sloops and schooners in the Caribbean before signing on as m ate aboard the brigantine Romance for a wo rld circumnavigation under the command of Captain Ar thur Kimberly. Receiving this award in front of an international audience was especially fitting, as Moreland's seafarin g career was forged in ships h ailing from E urope and Scandinavia, the Ca ribbean , the United States, Canada, and beyond. In his acceptance speech, Cap tain Mo reland recognized his Danish captains from his sea time in the Danmark as important m entors, and

Capt. Dan Moreland accepts the Tall Ships America Lifetime Achievement Award. commended the ongoing work in maritime education and sail training of the Danmark and the D anish training ship Georg Stage. After his award-winning restoration and operation of the 1894 schooner Ernestina-Morrissey in the 1980s, development of the sail training program aboard the US Brig Niagara,

Come Experience the Hundred-year Voyage Aboard the Lagoda The Lagoda - the world's largest whaleship model - has been wowing visitors from around the world at the Museum for ioo years. Ensconced within the equally impressive Bourne Build ing, the ship and its story is just as remarkable today as it was in i916. Photo: The whaleship Lagoda sails into its second century of service as the Museum's signature exhibit and most unique learning tool. www.whalingmuseum .org

and working as m aster and mate aboard various sail training vessels, Moreland turned his attentio n to Picton Castle. He selected, d es igned, converted, and rigged the ship, and then proceeded to command her for most of the past twenty years, including six world circumnavigation voyages. Picton Castle's trainee crew participate fully in a11 aspects of shipboard life: standing watches, taking the helm, handlin g lines and sails, and assisting with the maintenance of the ship. Through this effort, they play a part in preserving traditional seamanship skills, and, perha ps more importantly, develop the skills required to work with others as responsible, resourceful citizens. Many leaders and crewmembers of the sail training community have trained under Moreland in one or more of his ships in his long career and credit their skills, knowledge, appreciation for ships, seafaring, and the sea to his tutelage and influence. (Picton Castle: POB 1076, 174 Bluenose Drive, Lunenburg, NS, Canada BOJ 2CO; Ph . 902 634-9984; www.picton-castle.com. TaJl Ships America, POB 1459, 221 3rd Street, Building 2, Ste. 101 , Newport, RI; Ph. 401 846-1775; www.tallshipsamerica.org) ... NOAA announced plans in January to consider possible expansion of the Monitor National Marine Sanctuary, off the North Carolina coast. The proposed boundary expansion would protect the single greatest concen tration of WWI and WWII shipwrecks in American waters and includes sunken vessels from US and British naval fleets, merchant ships, and Germ an U-boats. The USS Monitor shipwreck site became the first national marine sanctuary in 1975. Com ments on the proposal may also be submitted through 18 March via the Federal eRulemaking Portal at www.regulations.gov (docket # NOAA-NOS-2015-0165). For more info rmation contact Monitor National Marine Sanctuary superintendent, David Alberg at David.Alberg@noaa.gov. (www. monitor.noaa.gov) ... In January, the Connecticut State Bond Commission appnoved $2 million in state funding to ass;ist with the construction of the new Thompson Exhibition Building at Mystic Seaport museum. The