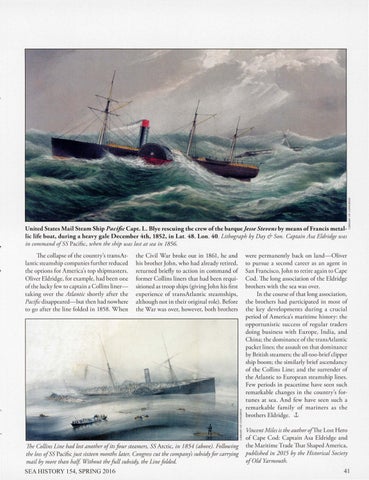 United States Mail Steam Ship Pacific Capt. L. Blye rescuing the crew of the barque Jesse Stevens by means of Francis metal- ~ lie life boat, during a heavy gale December 4th, 1852, in Lat. 48, Lon. 40. Lithograph by Day &amp; Son. Captain Asa Eldridge was in command ofSS Pacific, when the ship was lost at sea in 1856. Th e collapse of the country&#39;s tra nsAtlantic steamship companies further reduced the options fo r America&#39;s top shipmas ters. O live r Eldridge, for example, had been one of the lucky few to captain a Collin s linertaking over the Atlantic shortly after the Paciji&#39;c disappeared- but then had nowhere to go after the line folded in 1858 . When

the C ivil War broke out in 1861 , he and his brother John, who had already retired, re turned briefly to action in command of fo rmer C ollins liners that had been requisitioned as troop ships (giving John his first experience of transAtlantic steamships, although not in their original role). Before the War was over, however, both brothers

The Collins Line had lost another ofits four steamers, SS Arctic, in 1854 (above). Following the loss ofSS Pacific just sixteen months later, Congress cut the company&#39;s subsidy for carrying mail by more than half Without the fa ll subsidy, the Line folded. SEA HISTORY 154, SPRING 201 6

were permanently back on land-Oliver to pursue a second career as an agent in San Fra ncisco, John to retire again to Cape Cod . The long association of the Eld ridge bro thers with the sea was over. In the course of that long association, the brot hers had participated in most of the key developments during a crucial period of America&#39;s maritime histo ry: the opportunistic success of regular traders doing business w ith Europe, India, and China; the dominance of the transAd antic packet lines; the assault on that dominance by British steamers; the all-too-brief clipper ship boom; the similarly brief ascendancy of the Collins Line; and the surrender of the Atl antic to European steamship lines. Few periods in peacetime have seen such remarkable changes in the country&#39;s fortunes at sea. A nd few have seen such a rem arkable fa mily of m ariners as the brothers Eld ridge. 1,

Vincent Miles is the author ofThe Lost H ero of Cape Cod: Captain Asa Eldridge and the Mariti me Trade That Shaped America, published in 2015 by the Historical Society of Old Yarmouth. 41