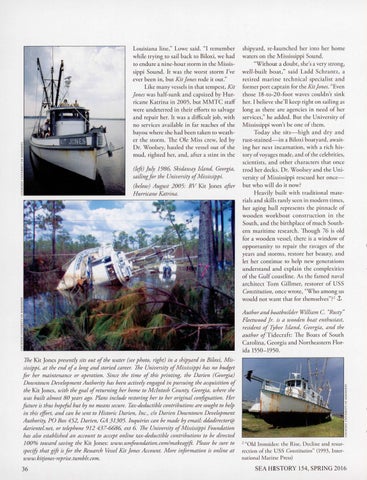 Louisiana line," Lowe said. "I remember while trying to sail back to Biloxi, we had to endure a nine-hour storm in the Mississippi Sound. It was the worst storm I've ever been in, but Kit Jo nes rode it out." Like m any vessels in that tempest, Kit Jones was half-sunk and capsized by Hurrica ne Katrina in 2005 , but MMTC staff we re undeterred in their efforts to salvage and repair her. It was a difficult job, with no services available in far reaches of the bayo u where she had been taken to weather the storm . The Ole M iss crew, led by Dr. Woolsey, h auled the vessel our of the mud, righted her, and, after a stint in the (left) July 1986, Skidaway Island, Georgia, sailing for the University ofMississippi. (below) August 2 005: RV Kit Jones after H urricane Katrina.

shipya rd, re-launched her into her hom e waters on the Mississippi Sound. "Without a doubt, she's a very strong, well-built boat," said Ladd Schrantz, a retired marine technica l specialist and former port captain for the Kit Jones. "Even those 18-to-20-foot waves couldn't sink her. I believe she'll keep right on sailing as long as there are agencies in need of her services," he added. But the University of M ississippi won't be one of them. Today she sits-high and dry and rust-stained-in a Biloxi boatya rd, awaiting her next incarnation , with a rich history of voyages made, and of the celebrities, scientists, and other characters that once trod her decks. Dr. Woolsey and the University of Mississippi rescued her oncebut who will do it now? Heavily built with traditional m aterials and skills rarely seen in modern times, her aging hull represents the pinnacle of wooden workboat con struction in the South, and the birthplace of much Southern maritime research. Though 76 is old for a wooden vessel, there is a window of opportunity to repair the ravages of the yea rs and storms, restore her beauty, and let her continue to help new generations understand and explain the complexities of the Gulf coas tline. As the famed naval architect Tom Gi llmer, restorer of USS Constitution, once wrote, "Who among us wo uld not want that for themselves"?2 ,t Author and boatbuilder William C. "Rusty" Fleetwood J r. is a wooden boat enthusiast, resident of Tybee Island, Georgia, and the author ofTidecrafr: The Boats of South Carolina, Georgia and Northeastern Florida 1550-1950.

The Kit Jones presently sits out of the water (see photo, right) in a shipyard in Biloxi, Mississipp i, at the end of a long and storied career. The University ofMississippi has no budget for her maintenance or operation. Since the time of this printing, the Darien (Georgia) Downtown Development Authority has been actively engaged in pursuing the acquisition of the Kit Jones, with the goal of returning her home to Mcintosh County, Georgia, where she was built almost 80 years ago. Plans include restoring her to her original configuation. H er future is thus hopeful but by no means secure. Tax-deductible contributions are sought to help in this effort, and can be sent to H istoric Darien, Inc., c/o Darien Downtown D evelopment Authority, PO Box 452, Darien, GA 3 13 05. Inquiries can be made by email: ddadirector@ darientel.net, or telephone 912 437-6686, ext 6 The University ofMississippi Foundation has also established an account to accept online tax-deductible contributions to be directed 100% toward saving the Kit Jones: www.umfoundation. com/makeagift. Please be sure to 2 "Old Ironsides: rhe Ri se, D ecline and resurspeciJY that gift is for the Research Vessel Kit Jo nes Account. More information is online at rec tion of the USS Constitution" (1 993 , International Marine Press) www. kit)ones-reprise. tumblr. com.