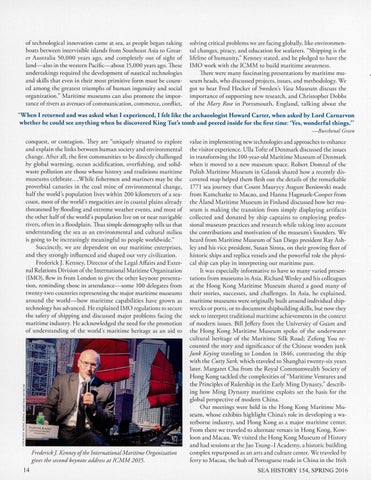 of technological innovation came at sea, as people began taking boats between intervisible islands from Southeast Asia to Greater Australia 50,000 years ago, and completely out of sight of land-also in the western Pacific-about 15,000 years ago. These undertakings required the development of nautical technologies and skills that even in their most primitive form must be counted among the greatest triumphs of human ingenuity and social organization." M aritime museums can also promote the importance of rivers as avenues of communication, commerce, conflict,

solvi ng critical problems we are fac ing globally, like environmental changes, piracy, and education for seafarers. "Shipping is the lifeline of humanity," Kenney stared, and he pledged to have the IMO work with rhe ICMM to build maritime awa reness. There were many fascinating presentations by maritime museum heads, who discussed projects, issues, and methodology. We gor to hear Fred Hocker of Sweden's Vasa Museum discuss the importance of supporting new research, and C hristopher Dobbs of the Mary Rose in Portsmouth, E ngland, talking about the

"When I returned and was asked what I experienced, I felt like the archaeologist Howard Carter, when asked by Lord Carnarvon whether he could see anything when he discovered King Tut's tomb and peered inside for the first time: 'Yes, wonderful things."' -BurchenaL Green

conquest, or contagion. They are "uniquely situated to explore and explain rhe links between human society and environmental change. After all, the first communities to be directly challenged by global warming, ocean acidification, overfishing, and solidwaste pollution are those whose history and traditions mar itime museums celebrate ....While fishermen and mariners may be rhe proverbial canaries in rhe coal mine of environmental change, half the world's population lives within 200 kilometers of a seacoast, most of the world's megaciries are in coastal plains already threatened by flooding and extreme weather events, and most of the other half of the world 's population live on or near navigable rivers, often in a floodplain . Thus simple demography tells us char understanding the sea as an environmental and cultural milieu is going to be increasingly meaningful to people worldwide." Succinctly, we are dependent on our maritime enterprises, and they strongly influenced and shaped our very civilization . Frederick J. Kenney, Director of the Legal Affairs and External Relations Division of the International Maritime Organization (IMO), flew in from London to give the other keynote presentation, reminding those in arrendance-some 100 delegates from twenty-two countries representing rhe major maritime museums around the world-how maritime capabilities h ave grown as technology has adva nced. He explained IMO regulations to secure rhe safety of shipping and discussed major problems faci ng the maritime industry. He acknowledged the need for rhe promotion of understanding of the world's maritime heritage as an aid to

value in implementing new technologies and approaches to enhance rhe visitor experience. Ulla Tofte of Denmark discussed the issues in transforming the 100-yea r-old Maritime Museum of Denmark when it moved to a new museum space. Robert Domzal of rhe Polish Maritime Museum in Gdansk shared how a recently discovered map helped them flesh out the derails of the remarkable 1771 sea journey that Courn Maurycy August Beniowski made fr om Kamcharke to Macao, and Hanna Hagmark-Cooper from the Aland Maritime Museum in Finland discussed how her museum is making the transition from simply displaying artifacts collected and donated by ship captai n s to employing professional museum practices and research while raking irno accourn rhe cornributions and motivation of the museum's founders. We heard from Maritime Museum of San Diego president Ray Ashley and his vice president, Susan Sirota, on their growing fleet of historic ships and replica vessels and rhe powerful role rhe physical ship can play in irnerprering our maritime pas t. Ir was especially informative to have so many varied presentations from museums in Asia. Richard Wesley and his colleagues ar rhe Hong Kong Maritime Museum shared a good many of their stories, successes, and challenges. In Asia, he explained, maritime museums were originally built aro und individual shipwrecks or ports, or to document shipbuilding skills, but now they seek to interpret traditional maritime achievements in the cornext of modern issues. Bill Jeffery from rhe University of Guam and the Hong Kong Maritime Museum spoke of the underwater cultural h eritage of the Maritime Silk Road; Zefeng You recourned rhe story and significance of the Chinese wooden junk j unk Keying traveling to London in 1846, contrasting rhe ship with the Cutty Sark, which traveled to Shanghai rwerny-six years later. Margaret C hu from rhe Royal Commonwealth Society of Hong Kong cackled rhe complexities of"Maritime Vernures and the Principles ofRulership in the Early Ming D ynasty," describing how Ming Dynasty maritime exploits set the basis for the global perspective of modern China. Our meetings were held in the Hong Kong Maritime Museum, whose exhibits highlight China's role in developing a waterborne industry, and Hong Kong as a major maritime cerner. From there we traveled to alternate venues in Hong Kong, Kowloon and Macau. We visited the Hong Kong Museum of History and had sessions at the Jao Tsung-I Academy, a historic building complex repurposed as an arts and culture center. We traveled by ferry to M acau, the hub of Portuguese trade in China in rhe 16rh SEA HISTORY 154, SPRING 2016