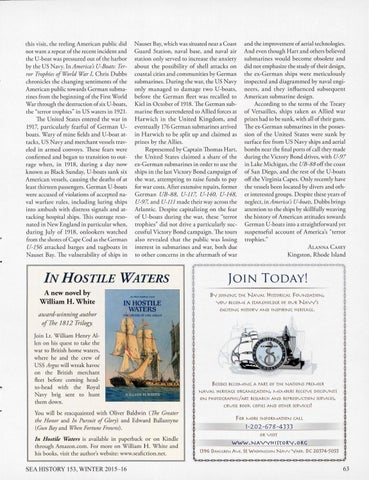 rhis visir, rhe reeling American public did nor want a repear of rhe recent incident and rhe U-boar was pressured our of rhe harbor by rhe US Navy. In A mericas U-Boats: Terror Trophies of World War I, Chris Dubbs chronicles rhe changing sentiments of rhe America n public cowards German submarines from the beginning of rhe First World War through the destruction of six U-boars, the "rerror rrophies" in US waters in 192 1. The United States entered the war in 1917, particularly fearful of Germ an U boats. Wary of mine fields and U-boat attacks, US Navy and merchant vessels traveled in armed convoys. These fea rs were confirmed and began to rransirion to outrage when, in 1918, during a d ay now known as Black Sunday, U-boats sank six American vessels, causing rhe deaths of ar least thirteen passengers. German U-boats were accused of violations of accepted naval wa rfa re rules , including luring ships into ambush with distress signals and artacking hospiral ships. This outrage resonated in New England in particular when, during July of 1918 , onlookers watched from rhe shores of Cape Cod as rhe German U-156 attacked barges and tugboats in Nauset Bay. The vulnerabiliry of ships in

Nauset Bay, which was situated near a Coasr G uard Station, naval base, and naval air starion only served to increase the anxiety about the possibility of shell attacks on coastal cities and communities by German submarines. During the war, the US N avy only managed to d am age two U -boats, before the German fleet was recalled to Kiel in October of 1918. The Germ an submarine fleer surrendered to Allied forces ar H arwich in the U nited Kingdom, and evenrually 176 German submarines arrived in H arwich to be splir up and claimed as prizes by the Allies. Represented by Caprain Thomas H art, the United States claimed a share of the ex-German submarines in order to use the ships in rhe las t Victory Bond campaign of the war, arrempring to raise funds to pay for wa r cosrs. After extensive repairs, former Germa n UB -88, U-117, U-14 0, U-148, U-97, and U-111 made their way across the Atlantic. D espite capitalizing on the fear of U -boats during the war, these "terror trophies" did not drive a particularly successful Victory Bond campaign. The tours also revealed that the public was losing interes t in submarines and war, both due to other concerns in the aftermath of war

and the improvement of aerial rechnologies. And even though H art and others believed submarines wo uld become obsolete and did not emphasize the study of their design, the ex-German ships were meticulously inspected and diagrammed by naval engineers , a nd they influenced subsequent American submarine design. According to the rerms of rhe Treary of Versailles, sh ips taken as A llied war prizes had to be sunk, wirh all of rheir guns. The ex-German submarines in rhe possession of rhe U nited Srares were sunk by surface fire from US Navy ships and aerial bombs near rhe final porrs of call rhey made during rhe Victory Bond drives, wirh U-97 in Lake Michigan, rhe UB-88 off rhe coasr of Sa n Diego, and rhe resr of rhe U-boars off rhe Virginia Capes. Only recently have rhe vessels been locared by divers and other interes red groups. D espire these yea rs of neglecr, in Americas U-boats, Dubbs brings arrention to rhe ships by skillfully weavin g rhe history of American attirudes towa rds Germ an U-boars into a srraighrforwa rd yer suspenseful account of America's "terror rrophies." ALANNA CASEY

You will be reacquainted wirh Oliver Baldwin ( 'Ihe Greater the Ho nor and In Pursuit of Glory) and Edward Ballanryne (Gun Bay and When Fortune Frowns).