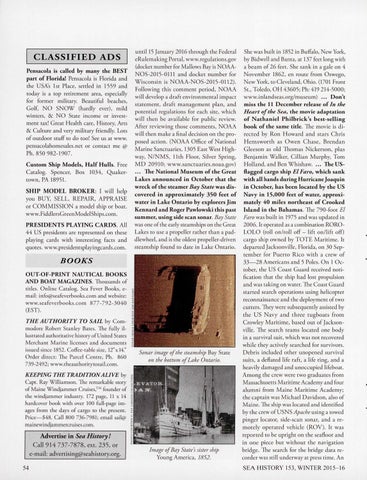 CLASSIFIED ADS Pensacola is called by many the BEST part of Florida! Pensacola is Florida and the USA&#39;s 1st Place, settled in 1559 and today is a top retirement area, especially for former military. Beautiful beaches, Golf, NO SNOW (hardly ever) , mild winters, &amp; NO State income or investment tax! Great H ealth care, History, Arts &amp; Culture and very military friendly. Lots of outdoor stuff to do too! See us at www. pensacolahomesales.net or contact me @ Ph. 850 982-1907. Custom Ship Models, Half Hulls. Free Catalog. Spencer, Box 1034, Quakertown, PA 1895 1. SHIP MODEL BROKER: I will help you BUY, SELL, REPAIR, APPRAISE or COMMISSION a model ship or boat. www.FiddlersGreenModelShips.com. PRESIDENTS PLAYING CARDS. All 44 US presidents are represented on these playing cards with interesting fac ts and quotes . www.presidentsplayingcards.com.

until 15 January 2016 through the Federal eRulemaking Portal, www.regulations.gov (docket number fo r Mallows Bay is NOAAN O S-2015-0111 and docket number for W isconsin is N OAA-N O S-2015-011 2) . Following this comment period, NOAA will develop a draft environmental impact statement, draft m anagement plan, and potential regulations for each site, which will then be avail able for public review. After reviewing those comments, N OAA will then make a final decision on the proposed action. (NOAA Office of National M arine Sanctuaries, 1305 East Wes t Highway, N /NM S, 11th Floor, Silver Spring, MD 20910; www. sancm aries. noaa.gov) ... The National Museum of the Great Lakes announced in October that the wreck of the steamer Bay State was discovered in approximately 350 feet of water in Lake Ontario by explorers Jim Kennard and Roger Pawlowski this past summer, using side scan sonar. Bay State was one of the early steamships on the G reat Lakes to use a propeller rather than a paddlewheel, and is the oldest propeller-driven steamship fo und to date in Lake Ontario.

She was built in 1852 in Buffalo, New York, by Bidwell and Banta, at 137 feet long with a beam of 26 feet. She sank in a gale on 4 N ovember 1862 , en ro ute from Oswego, New York, to Cleveland, Ohio. (1701 From St. , Toledo, OH 43605; Ph: 419 214-5 000; www.inlandseas.org/museum) . . . Don&#39;t miss the 11 December release of In the Heart of the Sea, the movie adaptation of Nathaniel Philbrick&#39;s best-selling book of the same title. The movie is directed by Ron H oward and stars C hris H emsworth as O wen C hase, Brendan Gleeson as old Thom as Nickerson, plus Benjamin Walker, Cillian Murphy, Tom Holland, and Ben Whish aw. ... The USflagged cargo ship El Faro, which sank with all hands during Hurricane Joaquin in October, has been located by the US Navy in 15,000 feet of water, approximately 40 miles northeast of Crooked Island in the Bahamas. The 790-foor El Faro was built in 1975 and was updated in 2006. It operated as a combination ROROLOLO (roll on/roll off - lift on/lift off) cargo ship owned by TOTE M aritime. Ir departed Jacksonville, Florida, on 30 September fo r Puerto Rico with a crew of 33-28 Americans and 5 Poles. On 1 O ctober, the US Coast G uard received notification that the ship had lost propulsion and was raking on water. The Coast G uard started search operations using helicopter reconnaissance and the deployment of two cutters. They were subsequently assisted by the US N avy and three tugboats from C rowley M ariti me, based our of Jacksonville. The search teams located one body in a survival suit, which was not recovered while they ac tively searched for survivors. Debris included other unopened survival suits, a deflated life raft, a life ring, and a heavily damaged and unoccupied lifeboat. Among the crew were two graduates from Massachusetts M aritime Academy and four alumni fro m M aine Maritime Academy; the captain was Michael Davidson, also of M aine. The ship was located and identified by the crew ofUSNS Apache using a towed pinger locator, side-scan sonar, and a remotely operated vehicle (ROV). Ir was reported to be upright on the seafloor and in one piece but without the navigation bridge. The search for the bridge data recorder was still underway at press time. An